Lymm is a village and parish in Cheshire, on the border with Lancashire. It incorporates the hamlets of Booths Hill, Broomedge, Church Green, Deansgreen, Heatley, Heatley Heath, Little Heatley, Oughtrington, Reddish, Rushgreen and Statham. At the 2011 census it had a population of 12,350.[1]

The name, of Celtic origins, means a "place of running water" and is likely derived from an ancient stream that ran through the village centre.[2]

Lymm High School is located in the community. The school accepts students from Lymm and in the surrounding villages and hamlets.

The Manchester Japanese School, a weekend Japanese educational programme, is held at the Language Centre at Lymm High School.[3]

Lymm village centre is a designated conservation area, notable for its historic buildings, both listed and unlisted. These include the French-style terracotta former town hall (currently unlisted); St Peter's Church, Oughtrington Hall and Lodge, formerly owned by a cadet branch of the Leigh family and now Lymm High School; and Lymm Hall, a former Domville family residence.[4] Foxley Hall, home to a cadet branch of the ancient Booth family, before ownership passed to the Carlisle family[5] is no longer standing, but fustian-cutting cottages on Church Road and Arley Grove do survive. The Parish Church of St Peter, Oughtrington is an example of Gothic Revival architecture.[6] St Mary's Church, Lymm,[7] overlooking Lymm Dam, was in a state of disrepair by the mid-1800s so the Leigh family commissioned the noted Newcastle architect John Dobson to rebuild it. The 1521 tower was retained and raised, but the need for additional stonework meant the tower was rebuilt in 1887.

Lymm Cross, usually known simply as "the Cross", is a Grade-I listed structure dating from the 17th century, restored in 1897.[8][9]

Lymm Heritage Centre, which opened in June 2017 is in the centre of the village on Legh St. It hosts exhibitions related to local history as well as activities for schools and visitors. 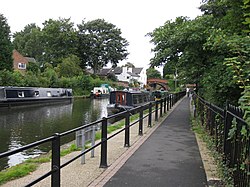 The Bridgewater Canal at Lymm

The M56 (junctions 7 & 9) and M6 (Junction 20) motorways are both within three miles of Lymm.[10] The conjunction of these motorways with the A50[11] is known as the Lymm Interchange, and hosts a service station known as the Poplar 2000 services, a well used truck stop. The A56 also passes just south of the village, connecting the nearby towns of Warrington and Altrincham.[12] Buses to Lymm from Warrington and Altrincham are frequent during the weekday and on Saturdays.[13]

The Bridgewater Canal passes through the centre of Lymm. The Manchester Ship Canal passes to the north, and beyond its route lies the River Mersey.To the east of Lymm the River Bollin flows along the village's border with Warburton.

Lymm railway station was on Whitbarrow Road. It opened on 1 November 1853. There was a further station at Heatley, on Mill Lane, for salt and lead. The line closed to passengers on 10 September 1962; it was officially closed to all types of traffic on 7 July 1985, but lasted a few months. Then it became financially unviable, and the tracks and sleepers were rapidly lifted. Today the old track forms a good stretch of the Trans Pennine Path with a ranger station at Statham, near the centre of the village. To the east, the track ran via Dunham into Broadheath and the Manchester network. To the west, the track used to run into Warrington, via Latchford, and the tar processing on Loushers Lane, then into Bank Quay Low Level. The entire section is now pathways, except for the high level bridge crossing the ship canal, whose future is yet to be decided. Lymm today has no railway station; the closest stations are at Birchwood, Warrington, Knutsford and Altrincham.

2137 (Lymm) Squadron formed in 1964 as part of the programme to reestablish units that had been closed following the Second World War. They formed at Park Road in Broomedge with a wooden spooner hut. In 2015 this was demolished to make way for a new £300,000 facility which was opened in 2016.[14]

Association football is played at Lymm FC (three teams) Lymm Rovers FC and Lymm Piranhas JFC whilst Lymm Rugby Union Club[15] fields four teams on a regular basis. There is angling at Lymm Dam and at Meadow View, Whitbarrow Road, Statham, where there are three-man-made lakes stocked with a variety of fish. Angling is represented by the Lymm Angling Club.[16]

Lymm has a number of other sports facilities, including Lymm Golf Club[17] and nearby High Legh Park Golf Club; Lymm Lawn Tennis and Croquet Club;[18] Lymm Oughtrington Park Cricket Club,[19] whose home ground is in the former grounds of Oughtrington Hall, a former ancestral home of a cadet branch of the Leigh family; and Lymm Leisure Centre[20] which is next door to the cricket club at Lymm High School. Burford Lane Farm is one of many horse riding venues in north Cheshire. Crown green bowling takes place in Stage Lane, the Oughtrington club having been established over a hundred years.