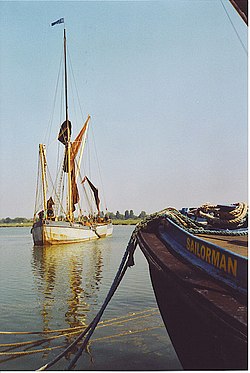 Barge in the Blackwater at Maldon 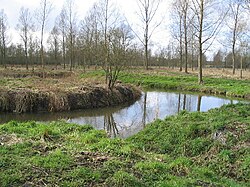 The Blackwater near Kelvedon

The River Blackwater is a river in Essex, which at Malsdon opens out into a broad estuary to enter the North Sea beyond. 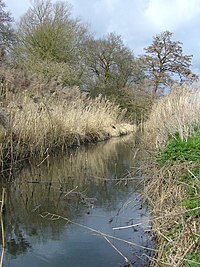 At Maldon the Blackwater is a broad, tidal estuary filled with boats, both working vessels and pleasure boats, and eventually it reaches the North Sea at West Mersea. The ubiquitous boat here is the Thames sailing barge, a traditional wooden vessel whose distinctive red sails were in past days the commonplace barges plying the coastal trade here and all down to London.

The lowest, canalised, reach of the River Chelmer meets the River Blackwater near Langford and some of its water flows over Beeleigh Weir and some flows down the canal. At Heybridge flood water from the canal flows over a weir at the site of the old Heybridge mill and down the original course of the Blackwater (now known as Heybridge Creek) before passing through a sluice gate into the tidal Blackwater Estuary at Maldon.

One of the most famous Viking battles in Britain, the Battle of Maldon, took place directly beside the river in 991. The contemporary epic poem known as The Battle of Maldon records that the Vikings landed on an island in the Blackwater (probably Northey Island) but could not cross because while the tide was still high Essex fyrd arrived on the shore and arrayed themselves along the channel. The waters of the river (named in the poem as the "Panta") began to ebb but the men of Essex, commanded by Bryhtnoth, Earl of Essex, held the crossing place. The poem records that to end the stand-off Bryhtnoth permitted the Vikings to cross the water in order to defeat them, but this he failed to do; Bryhtnoth was slain and the English line broke, some units fled and the Vikings had the victory.

The Blackwater was a source of fish and oysters for the town of Maldon during the Roman occupation. The remains of Anglo-Saxon fish traps were discovered in the river in the 1990s.[1]

During the winter of 1776 the Blackwater froze from Maldon to Osea Island, a distance of some four miles. The ice trapped fishing and cargo carrying vessels and blocked any imports of coal, oil, wool to Maldon.[2]

In 1793 the Chelmer and Blackwater Navigation Company was formed by Act of Parliament.[3] Over the next four years, the company built a navigation from Chelmsford to meet the tidal estuary of the River Blackwater in Colliers Reach at the place that is today called Heybridge Basin (after the canal basin there).

The burgers of the borough of Maldon refused to allow the canal to pass through their borough,[4] so the company routed it just outside the borough boundary, which is why it ended up at Colliers Reach, rather than at Maldon. From Chelmsford, the navigation mainly followed the course of the River Chelmer until it reached Beeleigh, near Maldon. Then it followed the course of the River Blackwater to Heybridge, and from there by way of a canal to the sea lock at Colliers Reach.

A weir connected the navigation to the tidal river Blackwater at Heybridge, where it powered a water mill. Heybridge mill was demolished after severe flooding in this area in 1953, but the mill house still stands. The river (known here as Heybridge Creek) was dammed between Heybridge Hall and Potman marsh in 1954 as part of a programme of flood defence improvements. Most of the water flowing down the River Blackwater nowadays flows over a weir at Beeleigh and along the tidal section of the Chelmer before rejoining the Blackwater just below the Hythe at Maldon.

In 1865 Parliament passed the Maldon Harbour Act authorized construction of a wharf on the west side of the southern end of Heybridge Creek on land belonging to the Great Eastern Railway Company, and improving the channels of the rivers Chelmer and Blackwater.[5]

A mediæval five-arched stone bridge over the River Blackwater at Heybridge (from which that village got its name) was replaced in 1870 by a 2-arched brick one.[6] That bridge was at the north end of the Causeway, at its junction with Heybridge Street and Holloway Road, but the bridge there now is hardly distinguishable as such. 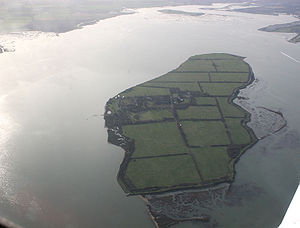 Osea Island, in the Blackwater Estuary

Osea Island is situated on the Blackwater Estuary, north of Steeple.

Northey Island owned by the National Trust, is approximately one mile to the west of Osea Island. It is part of an ancient landscape and is connected to the shore by a tidal causeway. It is believed by some to have been the site of the Battle of Maldon in 991 AD and offers birdwatching opportunities. 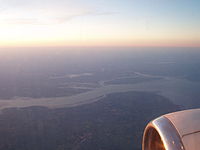