From Wikishire
(Redirected from Witham, Essex)
Jump to: navigation, search
Not to be confused with Wytham in Oxfordshire, the River Witham, Lincolnshire nor Witham Friary, Somerset

Witham (wɪtəm) is a town in Essex, a modest place with a population recorded in 2001 as 22,500. Witham stands between the larger towns of Chelmsford (eight miles to the southwest) and Colchester (13 miles to the northeast).

The River Brain runs through the town and joins the River Blackwater a little below Witham.

Excavations by Essex County Council field archaeological unit at the recent Maltings Lane development discovered evidence of Neolithic occupation of Witham including human remains and several trackways across ancient marsh. Excavations of the Witham Lodge (Ivy Chimneys) area of the town unveiled remains of a Roman temple in the 1970s as well as a pottery kiln. This would have been alongside the main Roman road from London to Colchester and used as a stop over point on the long journey, another notable find during the excavation was a Votive Offering pool in the grounds of the temple, the pool contained several artefacts that would have been offered to the gods. In 913, according to the Anglo Saxon Chronicle, Edward the Elder marched from Hartford to reconquer Essex and made an encampment here on his route to set up a base at Maldon. Witham's position on the Roman road in relation to the major Danish army based at Colchester was the most likely reason for this and it would have effectively cut Essex in two.

The name Witham is Anglo-Saxon in origin and remains unchanged in spelling from that time. The parish of Witham appears in the Domesday Book of 1086.

The manor of Witham was given to the Knights Templar in 1148. To the north of the current town is Cressing Temple which was the earliest foundation of Templar lands in Britain, built over 700 years ago.

The town as it is now started life on 'Chipping Hill', where the old forge and the church still exist to this day. As the years went by, the hamlet grew to become 'Witham' and St Nicolas Church of England Church (a unique spelling) serves a congregation of around 150 people each Sunday. During the latter half of the 18th century and the early 19th century, Admiral Sir William Luard was the town's most prominent citizen, a resident of Chipping Hill and a founder and patron of St. Nicolas' Church. His funeral cortege through the town in 1910 was witnessed by thousands.

Witham briefly enjoyed a period as an affluent spa town after the discovery of a mineral-bearing spa in the town by Dr Taverner in the 18th century. Witham was also a centre of the wool trade until the decline of the industry in the late 17th century. 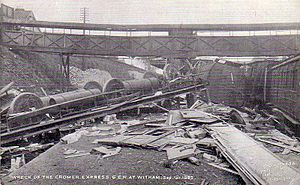 Witham railway station was the scene of a serious accident on Saturday 1 September 1905. The 09:27 London Liverpool Street to Cromer 14-carriage express derailed whilst travelling at speed through the station. 10 passengers and a Luggage Porter were killed when several of the carriages somersaulted on to the platforms causing considerable damage to the rolling stock and the station. 71 passengers were seriously injured.[1] This remains to this day the worst single loss of life in a railway accident in Essex. Ben Sainty, a signalman, whose quick action averted the next train hitting the wreckage has a road named after him in the town, Ben Sainty Court.

The town expanded greatly in the late 1960s and 1970s when the Greater London Council built 3 large council estates on the west and north sides of the town and a smaller one to the South for families from London to move to as part of the 'New Town' and 'Expanded Town' overspill policy of that time.

Starting in the 1980s but accelerating in the 1990s and 2000s a large number of houses were built in several estates to the south and southwest of the town infilling the farmland that used to exist between the town and the A12 bypass. The most recent of which is the Maltings Lane development, which when completed will exceed 1200 homes, a school, business park and community shopping area.

A one time famous resident of the town is the author Dorothy L Sayers whose statue stands opposite the town's library. The library stands on the site of the old Whitehall cinema, which closed in the late 1970s.

The town is served by Witham railway station, on the London Liverpool Street to Ipswich main line. Trains take approximately 40–45 minutes to reach Liverpool Street. The station is also the junction for the Braintree branch line to Braintree, Braintree Freeport, Cressing and White Notley. Another branch line, now dismantled, went from Witham to Maldon.

Witham is on the A12 trunk road between Chelmsford and Colchester. Originally the A12 ran in a straight line through the middle of the town; however for some decades there has been a by-pass completely avoiding the town.

Because of these excellent transport links, the town has a large number of residents who commute to work in London. This is evident by Witham railway station's appearance within the 150 busiest railway stations in Great Britain,[2] which would not be expected based on the town's population alone.

Witham has a mainly linear town centre, concentrated on the high street and its two modest shopping precincts form a cross, bisecting the high street, the Newlands Shopping Centre of 70s design to the north and the Grove Centre an 80s brick design to the south. There are a reasonable range of small shops, a full range of major high-street banks and several national commercial chains. The town also has three supermarkets, Tesco in the centre of town, Morrisons near the railway station and Asda near to Maltings Academy.

In March 2007, Crittall closed its Braintree factory and returned to Witham to occupy a new factory on the Freebournes Industrial Estate. The factory Crittall moved into was built for J.L. French in 2001, but never used for production. The new Crittall factory is visible on the right hand side of the road exiting Witham towards Colchester via the A12.