From Wikishire
(Redirected from Heybridge, Maldon)
Jump to: navigation, search

Heybridge is a large village and parish in Essex, adjacent to Maldon, near the River Blackwater. It is often overshadowed by its historic neighbour, and one could mistakenly think it to be the same town, as the two have merged with one another over the years. It had a population of 8,175 at the 2011 Census.[1]

An archaeological dig in 1995 showed the existence of an important Iron Age settlement and ritual complex, a large Roman settlement and a succeeding Saxon settlement, as well as scattered pre-historic remains.[2] Along the Goldhanger road are situated a number of traditional British holiday campsites, catering for both permanent residents and visitors.

Heybridge was originally called Tidwalditun. The name Heybridge came from the high bridge that was built over the River Blackwater in the Middle Ages, at Heybridge Square (the junction of Heybridge Street, Holloway Road, and the Causeway). This was a five-arched stone bridge and it was replaced in 1870 by a two-arched brick one.[3] Much of the water flow down this part of the river had, by then, been diverted into the River Chelmer by diversion work done during construction of the Chelmer and Blackwater Navigation.

Some people believe that the River Blackwater at Heybridge, near where the "high bridge" was later constructed, was the site of the Battle of Maldon. This belief, however, is contentious. The site of the battle cannot be unambiguously determined from the poem itself[4] and, over the years, various people have had different theories about where it happened.

Heybridge was an agricultural village until the 1970s and '80s, when a considerable proportion of the local farm land was given over to house building. The main industry in Heybridge itself, until it ceased trading in 1984, was the agricultural machinery manufacturer E H Bentall & Co. Established in 1805 on the south bank of the Chelmer and Blackwater Navigation, the company grew to be a large factory complex that operated for nearly 180 years.[5]

By 1914 Bentalls had 600–700 employees. During the Great War they took on female workers for the first time, and the workshop was equipped with pneumatic hoists. After the war, though, the fortunes of the company declined – largely due to its involvement in the Agricultural & General Engineers association. After A G E went bust in 1933 Bentalls gradually began to recover.[5]

In 1961 E H Bentall and Co was taken over by the Acrow group. Acrows went into receivership in 1984 and Bentalls factory closed down.[5]

Bentalls started life in the large building which still stands on the canal bank near the corner of Hall Road and Heybridge Street. It expanded across the road, eventually occupying all the land between Heybridge Street and the canal, with the exception of the site of the flour mill at Going's wharf, adjacent to the Wave bridge. In the early 1970s, a new factory complex was built on the other side of the canal, on land where Bentalls had previously had only offices and a foundry, and the land along Heybridge Street was vacated. Today, the Bentalls shopping centre occupies the later site.

Heybridge's facilities include a number of takeaways, two small supermarkets, a video shop, chemist, vets and dentist; many are situated around the Bentall's Shopping Complex along the Colchester Road. The town is also home to the popular Heybridge Swifts football club. 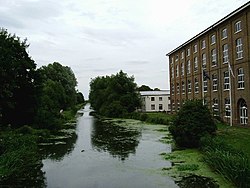 The Chelmer and Blackwater canal at Heybridge

The final stage of the Chelmer and Blackwater Navigation Canal runs from Beeleigh through Heybridge and terminates at Heybridge Basin. This stage of the canal required much planning and work at its inception, as a constant running water supply was needed to the two mills nearby, in Langford and Heybridge. This was achieved through the diversion of the river Blackwater and extensive works around the Beeleigh locks. The Chelmer and Blackwater Navigation Canal was originally used to transport coal & wood to the inland town of Chelmsford, as the direct road via Danbury crests the highest hill in south Essex. The canal was used for this purpose until the late '70s although it had been in steady decline since the Great Eastern Railway opened its lines to Maldon in the 19th century. Today it is mainly used for pleasure boats and fishing. 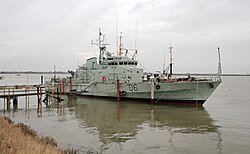 The retired fast attack boat the "Lowestoft Defender" moored in the Blackwater estuary at Heybridge Basin.

Another feature is Heybridge Basin, a community where the Chelmer and Blackwater Navigation Canal merges into the tidal Blackwater Estuary, fed by the rivers Blackwater and Chelmer. The two rivers are joined by a lock which is regularly used by pleasure boats. There are two pubs adjacent to the lock (The Old Ship Inn and The Jolly Sailor) which provide traditional British food. There is also a tea room, 'the lock' operated by Wilkin and Sons, the conserves company. The basin offers walks along the seawall and the canal leading back into the heart of Heybridge itself. During the summer months, rowing-boat hire is also available.

Francis Waring (1760–1833) was the vicar of Heybridge. He was notorious for the extraordinary way he performed the duties of his office. He would read church lessons at breakneck speed, give a very quick sermon of one or two sentences and then run down the aisle and leap onto a horse to gallop off and repeat the performance at two other churches in the area.

His domestic arrangements were equally peculiar. Although he wasn't poor, his vicarage was furnished with rough-hewn logs, instead of chairs. His children ate their meals from a trough next to the split-log dining table. He and his wife slept in an enormous wicker cradle suspended from the ceiling.

The Waring Room, St Andrew's church hall, is named after him.[6]

Edward Hammond Bentall (1814–1898) was an industrialist who developed the agricultural machinery manufacturing business established by his father William Bentall (1776–1836) and traded under the name E H Bentall & Co.[5] In 1873 he built a large Italianate house called The Towers at the corner of Goldhanger Road and Colchester Road. The house pioneered concrete block construction and was built with ducted air heating and no fireplaces, although some were added later. The house was demolished in the 1950s.[7] Today the site is occupied by the Towers Estate.