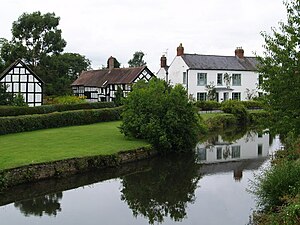 The River Arrow in Eardisland

The River Arrow flows through Radnorshire and Herefordshire, ultimately becoming a tributary of the River Lugg, which is itself a river of those two counties.

The Arrow rises near Gwaunceste Hill in Radnorshire. From here it flows south-eastwards through Newchuch and Michaelchurch-on-Arrow. It forms a short section of the county boundary, before flowing wholly into Herefordshire.

In Herefordshire, the Arrow runs through Kington and then heads east, passing Lyonshall, Staunton-on-Arrow (where it crosses through the line of the Rowe Ditch, an ancient defensive earthwork), then to Pembridge, Eardisland, Arrow Green, Monkland, Ivington and Broadward.

The Arrow enters the River Lugg south of Leominster, at Stoke Prior.

Ttributaries of the Arrow include the Gilwern Brook and the Honey Lake Brook, the latter of which passes through Ivington Green.