Wixford is a hamlet and parish in Warwickshire, situated a mile and a half south of Alcester. The population at the 2011 census was 155.[1] The name derives from a compound of the Old English personal name Whitlac with the noun for a river crossing "ford".[2] William Shakespeare is said to have joined a party of Stratford folk which set itself to outdrink a drinking club at Bidford-on-Avon, and as a result of his labours in that regard is said to have fallen asleep under the crab tree of which a descendant is still called Shakespeare's tree. When morning dawned his friends wished to renew the encounter but he wisely said "No I have drunk with "Piping Pebworth, Dancing Marston, Haunted Hillboro', Hungry Grafton, Dodging Exhall, Papist Wixford, Beggarly Broom and Drunken Bidford" and so, presumably, I will drink no more. The story is said to date from the 17th century but of its truth or of any connection of the story or the verse to Shakespeare there is no evidence.[3] The reasons for the village being described as papist remain unclear but may be a reference to the Catholic Throckmorton family as in 1541 it passed to Sir George Throckmorton, in whose family it remained until 1919, when the estate was sold and the manorial rights extinguished.[4]

The village is first mentioned when Ufa, a Saxon Earl of Warwick, gave the land at Wixford and his body to be buried to the monastery of Evesham Abbey in 974. However, Godwine a powerful man who had purchased the inheritance of that abbey from King Ethelred, granted it to Wulfgeat, son and heir to Ufa, for life, upon condition it was returned. Notwithstanding this agreement, Wulfgeat's heirs retained the land until, the time of King Edward the Confessor when Abbot Agelwyne purchased it from Wygod, a potent baron and heir to Wulfgeat, for a valuable price and regained it for the monks.[5] It is recorded in the Domesday Book "In Ferncombe Hundred, Evesham Abbey holds 5 hides in Witelavesford. Land for 6 ploughs. In lordship 2; 3 male and 2 female slaves; 4 villagers and 6 smallholders with 2 ploughs. A mill at 10s and 20 sticks of eels; meadow, 24 acres; woodland 1 furlong long and 1/2 wide. Value before 1066, 40s; later 30s; now 50s. Wigot held this land before 1066."[6]

The area is largely agricultural with no large employers in the area, most residents commuting to larger towns nearby. 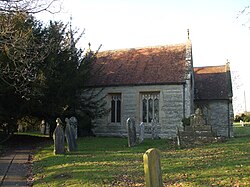 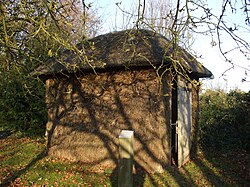 The parish church dedicated to Saint Milburga of Wenlock, was founded in the 12th century. Domesday makes no mention of a priest at Wixford, though the dedication of the church to the Saxon saint St Milburg seems to be evidence of its antiquity; but not necessarily of a pre-Conquest foundation, for the cult of St Milburg was revived, after a long neglect, by the translation of her relics at Wenlock in 1101.[4] It comprises a nave and chancel under one roof, south chantry chapel, south porch, and a bell turret There is one ancient uninscribed bell, and another by John Martin of Worcester, 1672, which was recast in 1937, retaining the old inscription.[7] The church was restored in 1881 and probably the south porch and the western bell turret are of that date.[4] There are two Norman doorways that on the south having columns.[8] The southern chapel dedicated to St John the Baptist was built early in the 15th century by Thomas de Cruwe who was legal advisor to Margaret Beauchamp Countess of Warwick. In the south chapel is the fine table tomb to Thomas de Cruwe and his wife, Juliana (1400–11) with fine canopied brasses.[9]

The church is approached by a churchyard shaded by an old yew. In 1660 six parishioners accused the rector of wishing to cut down a yew tree in the churchyard 'the like whereof is not to be found in all the diocese'.[3] In 1730 Dr. Thomas, rector here, gave its height as 53 ft. and circumference as 18 ft. 3 in. But according to a rhyme in a volume of cuttings relating to Ragley, at the Shire Hall— 'In 1763 in Wixford churchyard there was felled a yew tree, In 1765 There was planted another that never will thrive.'[4]

The churchyard also contains a grade II listed horsehouse of hurdle and gorse with a thatched roof dating from the 18th century.[10] Wixford never having a separate living, being a chapel of Exhall since the reformation so it was provided for the mounts of the visiting clergy from other parishes. There is also a fine large base of a churchyard cross with a moulded top edge, the stump of a shaft, and three steps to the platform dating from the 15th century.[4]

For much of the late 19th and early 20th century people travelled from Alcester to the Sunday evening services in St Milburga's.

The remains of Oversley Castle are half a mile north of the village and the Roman road Icknield Street runs very close by.

The village formerly was served by Wixford railway station, built by the Evesham & Redditch Railway Company in September 1866 as part of the Gloucester Loop Line. At the time of its closure in January 1950 it belonged to British Rail. The line, the station, and the associated railway bridge no longer exist as a result of the notorious Beeching Axe however, the Heart of England Way, popular with hikers, runs along part of the old line. The River Arrow also runs through the village.

The village has two pubs, the Fish Inn and the Three Horse Shoes.

Because of its proximity to the border of Worcestershire, the Exhall & Wixford cricket club, which plays in the Cotswold Hills League, is affiliated to both the Warwickshire and Worcestershire County Cricket Boards. The small village hall, with a capacity of 70, is available for hire by members of the public.