Pembridge is a village in Herefordshire sitting on the south side of the River Arrow on the A44 between Leominster and Kington.

Describing itself as The Jewel in the Crown of the Black and White Village Trail, Pembridge has a history stretching back at least eight hundred years and is notable for its many timber-framed buildings. As a result, it has been possible to date the construction of many of them using tree ring dating techniques with remarkable accuracy. In some cases this has allowed dating to the precise season in which they were erected, not just the year.

A set of almshouses atnd on the road down to the Arrow, founded by King Charles II.

Pembridge gained a royal charter allowing it to hold a market and two fairs in 1239. During the Middle Ages, the Cowslip Fair (held every May) and the Woodcock Fair (held in November) were important places for agricultural labourers across the county to seek work from landowners.

In 1856, the Leominster and Kington Railway developed a railway station to connect to Kington to Leominster. Taken over by the Great Western Railway and later by the nationalised British Rail, it closed to passengrs in 1955, and to freight in 1961.

Today, Pembridge has a population of around 1,000 with three pubs/restaurants catering to villagers and the village's many visitors too. 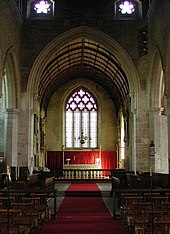 The parish church is St Mary's, standing a little above the High Street.

A Norman church stood here of which nothing remains but two 12th century arches in the Chancel. The main structure of the church was built between 1320 and 1360, work delayed by the Black Death of 1349.

It is a fine, spacious church, whose dimensions suggest the wealth once found in these hills. It also bears clues as to a more troubled time: behind the solid oak north door is a cavity in the wall into which was placed a strong oak beam to secure the door when the Church was used as a place of refuge in times of siege. The West shows signs of later troubles: it bears shot holes locally attributed to Cromwell's soldiers.

As with many churches, the Creed and Lord's Prayer were painted onto the walls after the Reformation, but most have been lost. The Lord's prayer has been restored at least. The Ten Commandments appear too.

The Bell Tower is of particular interest; it is one of Herefordshire's seven detached belfries and without doubt the finest. There is no other exactly like it in Britain; structurally, it is related to the stave churches of Norway and the bell houses of Sweden. It stands 48 feet north of the Chancel and consists of a stone ground storey, low and of an irregular octagonal shape 45 feet in diameter with a high truncated pyramid roof. The second stage is a vertical weather boarded bell stage with a truncated pyramid roof. The whole is crowned with a third smaller boarded stage with a little shingled spire.

Within the belfry (which can be entered by visitors) are carvings on the stone jambs which could have come from the earlier Church. Inside is revealed a most impressive timber structure surrounded by an ambulatory within the thick stone walls. Eight immense oak pillars form a square. These are braced both horizontally and scissor-fashion and rise to the top of the lower truncated pyramid roof.

In 1983-84 the tower underwent a complete restoration funded entirely by the government.

The original sructure is now considered to be early 13th century though only the four huge timber corner posts remain from the original building. The stone walls and outlying trusses were inserted in the 15th and 16th centuries and there was further remodelling in the 17th century. Since the restoration the Parish Council has assumed responsibility for the future maintenance of the tower.

It has been suggested that the Bell Tower was originally merely a framewortk of timber to support the bells whilst the Church was being built. For some reason or other, perhaps lack of money, a tower was never built and so the detached Bell Tower came into being.

It is evident from the narrow loop holes in the walls that it was, in its early days, used as a place of refuge and the holes in the door are reputed to be shot holes.