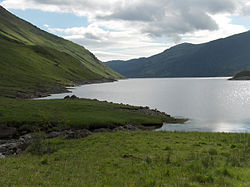 Loch Mullardoch is a major reservoir at the head of Glen Cannich in Inverness-shire. It was created by the damming in 1951 of the River Cannich just upstream of Mullardoch House, as part of the Affric-Beauly hydro-electric power scheme. A car park at the southern end of the dam is the terminus of the public road up Glen Cannich. The reservoir extends for about nine miles westwards into Ross-shire up the glen to the point where the Abhainn a Choilich and Abhainn Sithidh burns drop down from the West Benula deer forest.[1] 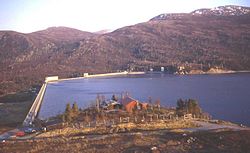 Prior to the construction of the concrete dam, which is the largest in Scotland, the natural Loch Mullardoch stretched for some four miles along the floor of the glen as far west as Benula Lodge and Benula Old Lodge, the sites of both of which now lie beneath the reservoir's waters. The diminutive Lochan na Cloiche and the larger Loch Lingard were drowned as the reservoir filled.[2]