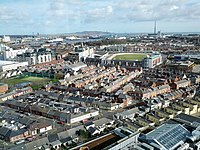 Ringsend with South Lotts in foreground

Ringsend in County Dublin has become an inner suburb of Dublin. It stands on the south bank of the River Liffey and east of the River Dodder, about a mile east of the city centre. It is the southern terminus of the East Link Toll Bridge. Areas included in Ringsend are the south side of the Dublin Docklands, and at the west end is the area of South Lotts and part of the Grand Canal Dock area. Neighbouring areas include Irishtown, Sandymount and the Beggars Bush part of Ballsbridge to the south, and the city centre to the west. A key feature of the area is the chimneys of Poolbeg power station.

Formerly the point where ships arriving from across the Irish Sea would dock, Ringsend went into decline in the 19th and 20th centuries, when the shipping moved to other locations, although there is still some container shipping.

Ringsend was originally a long narrow peninsula separated from the rest of Dublin by the then much broader estuary of the River Dodder. On early maps its name is given as "Ring's Ende" and the nearest settlements to it are given the names Merryon (Merrion) and Donny Brook. The original village of Ringsend would have been (approximately) where Sandymount Green is now.

At about the same time as the River Dodder was diverted at what is now the junction of Newbridge Avenue and Lansdowne Bridge, Sandymount (formerly known as The Brickfields) came into being. The English having moved the Irish outside the city walls started referring to the area towards the Ringsend peninsula as an "Irishtown." Reclamation of Dodder estuary and Liffey areas, including the building of York and Pidgeon House Roads and the Great South Wall (South Bull Wall), and development in the 16th and 17th centuries, out to the Poolbeg Lighthouse, led to an expansion of the area.

Areas of deep water off Ringsend Point were used as staging places where goods were trans-shipped for transport by light boat from here to the city. In 1640 the first Ringsend Bridge over the Dodder was built so that Ringsend and Dublin were linked by road and goods could be transported by packhorse to the city.[4]

Ringsend has long been known colloquially as Raytown, reflecting its history as a fishing village and popularity of the stingray fish, which is sold in local takeaways as battered ray.

Recent years have seen significant growth in the area, particularly with the Grand Canal Dock Project. A number of high-tech multinationals including Google established major offices in the area adding to the rejuvenation.

In the late 1980s, the Windmill Lane Studios moved to Ringsend and became Ringsend Road Studios, where many prominent musicians have recorded.

In Ringsend and the southern part of Dublin Port is the Great South Wall, connecting the Poolbeg Lighthouse to the mainland. The lighthouse lies at the extreme east end of the wall and was constructed in 1767. The stone wall that now stands was constructed over a period of many years and was completed in 1795. The wall and lighthouse are a popular walk destination.

Also around Poolbeg is the Poolbeg Generating Station, Dublin's main power station, with its two huge chimneys for steam – Dublin's tallest structures, the former Pigeon House Fort and a range of industrial buildings.

South of the Poolbeg peninsula and the Great South Wall lies the sandy area known as the South Bull. 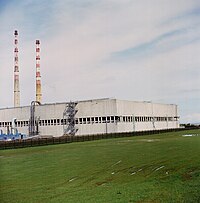 There was a Methodist Chapel in Ringsend first built in 1840, a replacement chapel was built in 1904. The congregation declined and it closed in 1961. The building was demolished and redeveloped.[6] The World War One memorial was moved to the united methodist and presbyterian, Christ Church in Sandymount.[7]

Ringsend has been used as a filming location, and may be seen in: