Ballsbridge is a village in County Dublin which has become absorbed into the urban townscape to become an affluent neighbourhood of the city of Dublin. The area is largely north and west of a three-arch stone bridge across the River Dodder, on the south side of the city. It is from this bridge, or rather its predecessor, that the village takes its name. The bridge of today is still named Ball's Bridge after the original bridge in this location which was built and owned by the Ball family, a well-known Dublin merchant family in the 1500s and the 1600s. The current bridge was built in 1791.

Ballsbridge was once part of the Pembroke Township.

18th-century maps show that the area of Dublin that is now Ballsbridge was originally mud-flats and marsh, with many roads converging on a small village located around the bridge, and known already as Ballsbridge. Situated on the Dodder, this village had a ready source of power for small industries, including by the 1720s a linen and cotton printers, and by the 1750s a paper-mill and a gunpowder factory.[1]

By the early 1800s Ballsbridge was a small settlement on a major road linking Dublin city with the port at Dalkey, where most of the shipping freight was landed, due to the shallow waters of the Liffey estuary. 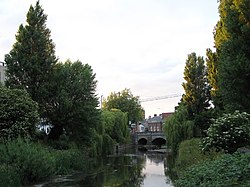 The land around Ballsbridge was rural and mostly belonged to the Earl of Pembroke. After the Royal Dublin Society moved into its present site near Ballsbridge in 1879, the Earl of Pembroke began to develop these lands into suburban residential housing. The Society held their first show on their new premises in the early 1880s.[1] In 1903 the lands formerly known as the ‘Forty Acres’ were given to the city by the Earl of Pembroke to establish Herbert Park (named from the Earl's surname, Herbert.) In 1907 the Dublin International Exhibition was held in Herbert Park.

Until 1965 there was a well-known botanical garden on Landsdowne Road near Ballsbridge. The garden belonged to Trinity College, which had leased land from the Earl of Pembroke. In 1960 the original lease from the Pembroke Estate expired and was not renewed. After reducing their size considerably, in 1965 Trinity decided to close the botanical gardens at that location and to open a new garden at Dartry. Two hotels now stand on the site.[1]

In 1916, the Mount Street bridge, which spans the Grand Canal at the foot of Northumberland Road, was the site of an important battle during the Easter Rising.[1][2] The O'Rahilly, one of the leaders of the Rising, lived at 40 Herbert Park. Another resistance leader, Eoin MacNeill, who refused to participate in the Rising, lived down the road at 19 Herbert Park. During the Irish war of independence, Michael Collins, Commander-in-Chief of the Irish National Army and later a government minister, had a study in the house of Miss Hoey at 5 Mespil Road, from where he carried out intelligence work.

A local train passes under the old Lansdowne Road Stadium

The bridge itself forms the heart of the Ballsbridge suburb which extends northwards towards the Grand Canal along Northumberland Road up to Haddington Road and Shelbourne Road, southwards along the Merrion Road towards Merrion and along Anglesea Road towards Donnybrook, and westwards to encompass the area around Pembroke Road, Clyde Road, Elgin Road and Herbert Park.

Herbert Park, a public park, is thirty-two acres in size and is divided by a road, also called Herbert Park, and forms part of Ballsbridge's nebulous border with Donnybrook.

The Royal Dublin Society has its grounds here, and the Lansdowne Road headquarters of the Irish Rugby Football Union is on the boundary between Ballsbridge and Irishtown. The corporate headquarters of Allied Irish Banks are also located in Ballsbridge. 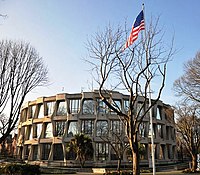 The United States Embassy in Ballsbridge

The American embassy, an iconic cylindrical building, is a major landmark in present-day Ballsbridge. It was designed in 1955 by John M. Johansen, Professor of Architecture at Yale University. The project was 9 years in incubation and the building was inaugurated in 1964.[1]