Blackpool Tower rises 518 feet above the town of Blackpool in Lancashire, a cast iron masterpiece built purely as a tourist attraction overlooking the seafront, as which it still serves.

The tower was modelled on the Eiffel Tower in Paris and was opened to the public on 14 May 1894. At 518 feet tall it is currently reckoned the 120th tallest freestanding tower in the world.[1] The tower is a Grade I listed building.[2]

The Blackpool Tower Company was founded by London-based Standard Contract & Debenture Corporation in 1890, when it bought an Aquarium on Central Promenade with the intention of building a replica Eiffel Tower on the site. John Bickerstaffe, a former Mayor of Blackpool, was asked to become Chairman of the new company and its shares went on sale in July 1891.

The Standard Corporation offered £150,000 worth of shares in its initial public offering, reserving kept 30,000 shares for itself. At the initial float only two-thirds of the shares were taken up, leaving the company short of cash and it sought contributions from its existing shareholders, but in its own financial condition, Stabndard was unable to pay: Bickerstaffe, to prevent the collapse of his venture, bought up available shares until his original holding of £500 amounted to £20,000. He also released the Standard Corporation from their share commitments. When the Tower opened in 1894 its success justified the overall investment of nearly £300,000, and the Company made a £30,000 profit in 1896.[3]

Two Lancashire architects, James Maxwell and Charles Tuke, designed the Tower and oversaw the laying of its foundation stone[4] on 29 September 1891.[5] By the time the Tower finally opened on 14 May 1894, both men had died.[4] Heenan & Froude of Worcester were appointed structural engineers, supplying and constructing both the main tower, the electric lighting and the steel front pieces for the aquariums. A new system of hydraulic riveting was used, based on the technology of Fielding & Platt of Gloucester.[6]

The total cost for the design and construction of the tower and buildings was about £290,000.[7] Five million Accrington bricks, 2,500 tons of iron and 93 tons of cast steel were used to construct the tower.[8] Unlike the Eiffel Tower, Blackpool Tower is not free-standing. Its base is hidden by the building which houses Blackpool Tower Circus. The building occupies a total of 54,357.7 square feet (5,050.0 m²).[2] At the summit of the tower there is a flagpole;[9][10] A time capsule is buried beneath the foundation.[7]

The design of the tower was ahead of its time. As a writer for the BBC noted: "In heavy winds the building will gently sway, what a magnificent Victorian engineering masterpiece."[10] 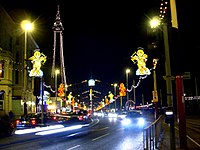 The Tower and Illuminations

When the tower opened, 3,000 customers took the first rides to the top.[4] Tourists paid sixpence for admission, sixpence more for a ride in the lifts to the top, and a further sixpence for the circus.[7] The first members of the public to ascend the tower had been local journalists in September 1893 using constructors' ladders.[11] In 1897 the top of the tower caught fire, and the platform was seen on fire from up to fifty miles away.[5]

The tower was not painted properly during the first thirty years and became corroded, leading to discussions about demolishing it. However, it was decided to rebuild it instead, and between 1921 and 1924 all the steelwork in the structure was replaced and renewed.[8]

On 22 December 1894 Norwegian ship Abana was sailing from Liverpool to Savannah, Georgia but was caught up in a storm, and mistook the recently built Blackpool Tower for a lighthouse. Abana was first seen off North Pier, and later drifted to Little Bispham where she was wrecked, and can still be seen at low tide. The ship's bell still hangs in St Andrews Church in Cleveleys.[12]

In 1940, during the Second World War, the crow's-nest was removed to allow the structure to be used as a Royal Air Force radar station known as RAF Tower,[9] which proved unsuccessful.

The top of the tower was painted silver in 1977 as part of Queen Elizabeth's Silver Jubilee celebrations.[2] A giant model of King Kong was placed on the side of the tower in 1984.[2] In 1985 escapologist Karl Bartoni and his bride were married suspended in a cage from the tower.[11]

The lifts and winding gear were again replaced in 1992.[2] The same year the tower complex was renamed Tower World and was opened by Diana, Princess of Wales.[13] The tower is usually painted in dark red, except for its centenary year in 1994 when it was painted gold by abseiling painters.[2][9] In 1998 a "Walk of Faith" glass floor panel was opened at the top of the tower. Made up of two sheets of laminated glass, it weighs half a tonne and is two inches thick.[11] In October 2007 a laser beam installed on the tower for the duration of the annual Illuminations was criticised by astronomer Sir Patrick Moore, presenter of The Sky at Night television programme, who said, "Light pollution is a huge problem. I am not saying we should turn all the lights out, that is not practical, but there are some things which are very unnecessary. The Blackpool Tower light is certainly something I do not think we should be doing. I very much oppose it." The beam could be seen 30 miles away; Moore called for it to be stopped. The Centre for Astrophysics at the University of Central Lancashire in Preston said the laser has added to a spiralling problem affecting astronomy.[14]

The tower has transmitters for local FM station Radio Wave 96.5 and some non-broadcast services. 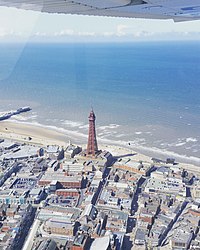 Blackpool from the air

The tower continued to be owned by the Bickerstaffe family until 1964, when the Blackpool Tower Company was sold to EMI.[15] Since then it has been owned by Trust House Forte, First Leisure and Leisure Parcs Ltd, owned by Trevor Hemmings. In March 2010 it was announced that Blackpool Council had bought Blackpool Tower and the Merlin Entertainment Group would manage it and add various attractions including a new Dungeon attraction[16] and a new observation deck called Blackpool Tower Eye will operate at the top of the tower.[17] The company will also manage the Blackpool Louis Tussauds waxwork museum to be rebranded as Madame Tussauds.

Blackpool is a popular seaside resort, and the beach-front tower is still a major attraction. It is lit during the annual Blackpool Illuminations, when the town and seafront are decorated with colourful illuminated displays for six miles along the promenade.

The top of the tower is known as the Blackpool Tower Eye. At a height of 486 feet, the Eye is the highest observation deck in Lancashire. It was previously known simply as the "Tower Top", until it reopened on 1 September 2011, having closed down the previous year for refurbishment, as part of the renovation of the entire Blackpool Tower complex, during which time Merlin Entertainments were brought in by new owners Blackpool Council to manage the attractions.

There are four levels in the Blackpool Tower Eye: 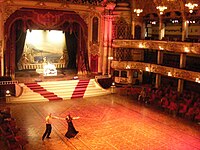 A couple dances on the floor of the Tower Ballroom

Jazz Event in the Tower Ballroom

The dance floor in the Tower Ballroom

The original ballroom, the Tower Pavilion, opened in August 1894. It was smaller than the present ballroom and occupied the front of the tower complex.[22] The Tower Ballroom was built between 1897 and 1898 to the designs of Frank Matcham, who also designed Blackpool Grand Theatre, and it opened in 1899. It was commissioned by the Tower company in response to the opening of the Empress Ballroom in the Winter Gardens. The ballroom floor is 120 feet x 120 feet and is made up of 30,602 blocks of mahogany, oak and walnut.[22] Above the stage is the inscription, "Bid me discourse, I will enchant thine ear" from the poem Venus and Adonis by William Shakespeare. Each crystal chandelier in the ballroom can be lowered to the floor to be cleaned which takes over a week.[23]

The ballroom was damaged by fire in December 1956, and the dance floor was destroyed along with the restaurant underneath the ballroom. Restoration took two years and cost £500,000, with many of the former designers and builders coming out of retirement to assist, the restaurant then became the Tower Lounge.[23]

The BBC series Come Dancing was televised from the Tower Ballroom for many years[24] and it has also hosted shows from Strictly Come Dancing, including the grand finals of the second and ninth series, on 11 December 2004, and 17 December 2011 respectively.[25]

The Blackpool Junior Dance Festival ("Open to the World") has been held each year in the ballroom since 1964.[22] Also the World Modern Jive Championships are held annually.

Dancing was not originally allowed on Sundays; instead, sacred music was played. The ballroom also originally had very strict rules including:

The ballroom has had a number of resident dance bands including Bertini and his band, and Charlie Barlow.[26][27] Other smaller dance bands have also appeared as residents including the Eric Delaney Band[28] and the Mike James Band.[29]

Under the management of Leisure Parcs, and the direction of bandleader Greg Francis, the Blackpool Tower Big Band was reformed in 2001 after an absence of 25 years. The New Squadronaires, The Memphis Belle Swing Orchestra and The Glenn Miller Tribute Orchestra also performed.[30] Themed nights were also introduced along with the sixteen piece orchestra, with resident singers. In 2005 the Empress Orchestra became resident in the ballroom alongside the specially created and smaller Empress Dance Band.[31] 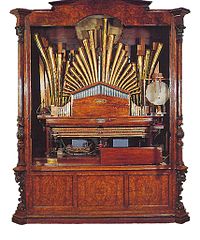 The Tower's orchestrion is now in the collection of Thinktank, Birmingham Science Museum.[32]

The Tower Circus is positioned at the base of the tower, between its four legs. The circus first opened to the public on 14 May 1894 and has not missed a season since.

The present interior was designed by Frank Matcham and was completed in 1900.

The circus ring can be lowered into a pool of water and holds 42,000 gallons at a depth of up to 4 feet 6 inches, which allows for Grand Finales with Dancing Fountains. The Tower Circus is one of four left in the world that can do this.

The clown Charlie Cairoli appeared at the tower for 39 years. Britain's best-known ringmaster Norman Barrett worked the ring for 25 years. The American elephant trainer Ephraim Thompson performed there in 1902. Animals appeared in the circus until 1990.

It was planned to close the circus at the end of the 1990 season and replace it with an animatronic attraction. Public opinion and the fact the animatronics were not ready meant that the circus continued.

Dr. Cocker's Aquarium, Aviary and Menagerie had existed on the site since 1873.[33] It was kept open to earn revenue while the tower building went up around it, and then became one of the tower's major attractions. The aquarium was modelled on the limestone caverns in Derbyshire. It housed 57 different species of fresh water and salt water fish and the largest tank held 56,310 pints@ of salt water.[34] The menagerie and aviary were regarded as one of the finest collections in the country and included lions, tigers, and polar bears.[35]

The menagerie continued until 1973,[33] when it was closed following the opening of Blackpool Zoo near Stanley Park. The aquarium closed in 2010 and was remodelled to make way for a new "Dungeons" attraction.[36][37] This was done by the Merlin Group, which took over the operation of the Tower at the end of the 2010 season on behalf of new owners Blackpool Council. 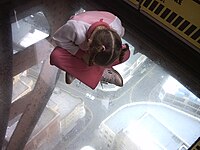 The Walk of Faith 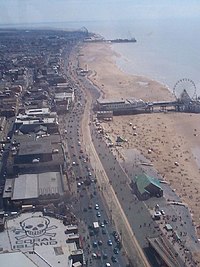 View from the top of the tower 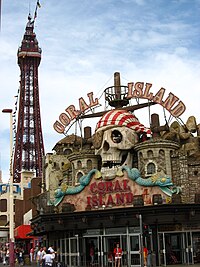 Other attractions within The Blackpool Tower complex include:

Painting the tower structure takes seven years to complete,[10] and the workers who maintain the structure are known as "Stick Men". There are 563 steps from the roof of the tower building to the top of the tower which the maintenance teams use for the structure's upkeep. If the wind speed exceeds 45 mph, the top of the tower is closed as a safety precaution. Five miles of cables feed the 10,000 light bulbs which are used to illuminate the tower. In April 2002 the Tower maintenance team was featured in the BBC One programme, Britain’s Toughest Jobs.[38]