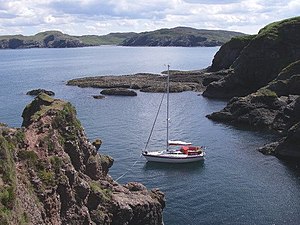 Eilean nan Ròn is an island near Skerray, in the north of Sutherland.[1] Its name is Gaelic for 'island of the seals' and 350 seal pups are born here annually.

Eilean nan Ròn was populated for many years, with seventy-three people living there in 1881 and 30 in 1931. It has been uninhabited since 1938.

The ruins of settlement can be seen from the Skerray and in the waist of the island, between Mol na Coinnle ("Pebble Beach of the Candles") and Mol Mòr ("big pebble beach").[2]

Eilean nan Ròn is not one of the Hebrides, which lie off the west coast. The island is mainly sandstone with steep cliffs on the north and east coasts and a natural arch at Leathad Ballach.,[2] which is 150 ft high, and 70 ft wide.[1] The high points are Cnoc an Loisgein at 249 ft and Cnoc na Caillich at 246 ft. As Rev. Wilson wrote in 1882:

It looks like two islands, is mostly engirt with high precipitous rocks, includes a low tract of very fertile soil.[1]

There are several islets and islands off Eilean nan Ròn. These include the tidal Eilean Iosal (low island), and beyond it Meall Thailm (or "Meall Holm"). To the south-west is the dully named An Innis ("small island"). The Rabbit Islands are in Tongue Bay to the south-west.

As the name implies, Eilean nan Ròn is popular with grey seals, that come here in their hundreds each autumn to pup.[3] About 350 calves are born each year.[2] The island is also home to large numbers of seabirds, and sheep, which were left when the Island was evacuated.