Portmarnock is a coastal suburban town in County Dublin. It lies on the coast between Malahide and Baldoyle, along the northern commuter railway line out of Dublin (also the Dublin-Belfast line); Portmarnock railway station opened on 25 May 1844,[1] is now on the DART network. Owing to its proximity to Dublin, Portmarnock forms a dormitory village , 10 miles north-north-east of the city centre. In the 2002 census the population was 8,376 and by 2011 this had climbed to 9,285.

At sea, Portmarnock could be said to border Sutton and perhaps Howth in the form of Ireland's Eye. The beach is monitored by a life guard during the summer season from early April to the start of October.

The district's name derives from the Irish word port – meaning port – and Saint Marnoch or Mernoc, said to have arrived in what is now Portmarnock in the 5th century AD.

The area had been settled in Neolithic times, with a number of remains of activity in the area still evident today, such as flints and other tools having been excavated at the northern fringe of Portmarnock. Further, the remains of a ring fort are visible from the air at the south of the town. The son of Queen Maedhbh of Connaught – Maine – is also said to have been buried locally.

Kites in the sky on Portmarnock beach

Adjacent to Portmarnock is a narrow beach which extends onto a sandy peninsula with beaches on all sides. Portmarnock's beach is nicknamed The Velvet Strand due to the beautiful smooth sand along the beach, and is popular with wind- and kite-surfers. 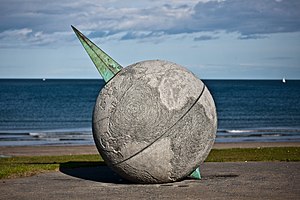 Portmarnock's beach was the starting point for two important pioneering flights. On 23 June 1930 Australian aviator Charles Kingsford Smith and his crew took off in the Southern Cross on the second, westbound transatlantic flight to Newfoundland, then they continued on to Oakland, California, completing a circumnavigation of the world. The first solo westbound transatlantic flight began from Portmarnock beach as on 18 August 1932 Jim Mollison, a British pilot, took a de Havilland Puss Moth from Portmarnock to Pennfield Ridge, New Brunswick.

Like many of Dublin's coastal settlements, Portmarnock is home to a Napoleonic Martello tower.

Portmarnock is famous for its world-class golf course which formally opened on 26 December 1894, while another links course, opened in the 1990s, was designed by German golfer Bernhard Langer. That golf course and its accompanying hotel are built around the former home of the Jameson distilling family.