Ireland's Eye is a small, uninhabited island off the coast of County Dublin situated directly north of Howth Harbour. The island is easily reached by regular tourist boats.

The leading theory has it that in ancient times the island was called Eria's Island (Eria being a woman's name) and that this became confused with Erin, derived from Éireann, the Irish name for Ireland. The Eye element may be the Old Norse Ey, meaning "island".

The island was also known formerly as Inis Faithlenn.[1] The Irish language name Inis Mac Neasáin means "Island of the Sons of Nessan", from the 8th-century Church of the Three Sons of Nessan found on the island.

The ruins of a Martello tower and an 8th-century church (the Church of the Three Sons of Nessan)[2] are the only signs of previous habitation. The tower's window entrance 16 feet above ground level can now be accessed by a rope that hangs down from the window.

The church functioned as the parish church for Howth until recent centuries, eventually being replaced by a church in the village due to the limitations of having to take a boat for every service. 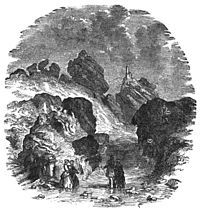 In September 1852 a woman named Sarah Maria Louisa Kirwan was killed on the island; her husband, William Burke Kirwan, was convicted of her murder.[3][4] Matthias McDonnell Bodkin claimed in Famous Irish Trials that no murder had taken place, instead that Sarah Kirwan had drowned accidentally as a result of a fit.[5] 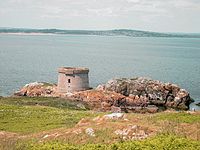 Ireland's Eye comprises the main island, a range of rocks and an islet called Thulla. The most spectacular feature is the huge freestanding rock called "the Stack", at the north-eastern corner of the island, which plays host to a large variety of seabirds, including thousands of guillemots, razorbills, fulmars and gulls. Ireland's fifth gannet colony became established on the Stack in the 1980s, and there are now a few hundred pairs breeding there each year. There is a large cormorant colony on the main island, and a few breeding pairs of puffins. Grey seals are abundant in the sea around the island.

The Eye is a townland in its own right, with a registered area of 53.1 acres.

Ireland's Eye is served by two small boat companies from Howth Harbour in the summer months. Access to the island has never been restricted and admission is free, though transportation to the island may not be.

The island has long been established as a minor rock-climbing location. About 28 routes have been recorded since the 1940s, though it is believed that climbers have operated on the island since the 1910s or before. Climbing does not take place during the seabird nesting season of April to July.[6][7]