Malahide is an affluent coastal suburban town in County Dublin. There are extensive residential areas to the south, west and north-west of the village.

The modern name Malahide may come from "Mullach Íde" meaning "the hill of Íde" or "Íde's sand-hill". It could also mean "Sand-hills of the Hydes" (from Mullac h-Íde) probably referring to a Norman family from the Donabate area.[1] According to the Placenames Database of Ireland the name Malahide is possibly derived from the Irish "Baile Átha Thíd" meaning "the town of the ford of Thíd".[2] Malahide Bay was anciently called Inber Domnann, the "river-mouth of the Fir Domnann".

Malahide is situated ten miles north of the city of Dublin, lying between Swords, Kinsealy and Portmarnock. It is situated on the Broadmeadow estuary, on the opposite side of which is Donabate.

The village is served by the Dublin Area Rapid Transit system and the train, run by Irish Rail.

While there are some remnants of prehistoric activity, Malahide is known to have become a persistent settlement from the coming of the Vikings, who landed in 795, and used Malahide Estuary (along with Baldoyle) as a convenient base. With the arrival of the Anglo-Normans, the last Danish King of Dublin retired to the area in 1171. From the 1180s, the history of the area is tied to that of the Talbot family of Malahide Castle, who were granted extensive lands in the area and over the centuries following developed their estate, and the small harbour settlement. 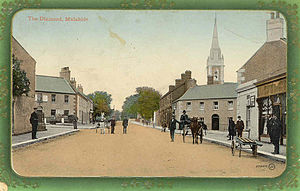 There is an ancient covered well, St Sylvester's, on the old main street (Old Street, previously Chapel Street), which used to have a "pattern" to Our Lady each 15 August.

In 1475 Thomas Talbot, head of the Talbot family of Malahide Castle, was granted the title Admiral of the port of Malahide by King Edward IV, with power to hold admiralty courts and levy customs duties on all merchandise coming into the port. The office was hereditary, and the family's right to act as Admiral was confirmed by the Court of Exchequer in 1639.[3]

By the early 19th century, the village had a population of over 1,000, and a number of local industries, including salt harvesting, while the harbour continued in commercial operation, with landings of coal and construction materials. By 1831, the population had reached 1223. The area grew in popularity in Georgian times as a seaside resort for wealthy Dublin city dwellers. This is still evident today from the fine collection of Georgian houses in the town and along the seafront, and Malahide is still a popular spot for day-trippers, especially in the summer months.

In the 1960s, developers began to build housing estates around the village core of Malahide, launching the first, Ard na Mara in 1964. Further estates followed, to the north-west, south and west, but the village core remained intact, with the addition of a "marina apartment complex" development adjacent to the village green. 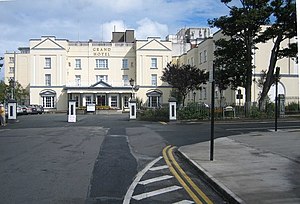 Malahide grew from a population of 67 in 1921 to 1500 in 1960 and by 2011 had a population of 15,846, and is still a rapidly growing town for the Dublin area. Most of the population lives outside the core village, in residential areas such as Seapark, Biscayne, Robswall, Chalfont, Yellow Walls, Ard Na Mara, Seabury and Gainsborough. Malahide has a higher percentage of professionals living in it than any other town in Ireland, according to figures released by the Central Statistics Office. Malahide came top of the socio-economic charts with the highest proportion of residents classified as employers, managers and higher professionals. These groups combined, make up 41.3% of Malahide's population.

In Malahide village there are extensive retail facilities and services including fashion boutiques, hair and beauty salons, florists, food outlets, and a small shopping centre. There is a wide selection of pubs (including Gibney's, Fowler's, Duffy's and Gilbert and Wright's) and restaurants and the 203-room Grand Hotel. 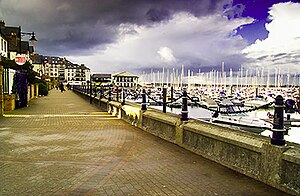 Near to the village itself is Malahide Castle and demesne, including, gardens, which were once the estate of Baron Talbot of Malahide.

Malahide also has a substantial marina.

The Malahide area has more than twenty residents' associations, sixteen of which (May 2007) work together through the Malahide Community Forum, which publishes a quarterly newsletter, The Malahide Guardian.

There is an active historical society (with a small museum at Malahide Castle Demesne), a Lions club, a camera club, a musical and drama society, the renowned Enchiriadis choirs, a chess club and a photography group which has published calendars.

Aside from Malahide Castle Demesne, there are a number of smaller parks (with further spaces planned, for example, at Robswall and Seamount). There are several golf courses nearby, and GAA, soccer, tennis, rugby, yacht clubs and Sea Scouts.

There are also a wide variety of sports clubs within the Malahide area. Rugby, soccer, GAA sports, sailing, hockey, golf, cricket, tennis and basketball are all well represented.

Malahide Basketball Club was formed in 1977 and currently fields 2 senior ladies teams, 2 senior men's teams and 15 junior girls and boys teams (from under 10 to under 18). They train and play all their home matches at Malahide Community School and Holywell Community Centre.

Originally Malahide Hockey Club now amalgamated with Fingal Hockey Club (formerly Aer Lingus) to become Malahide Fingal Hockey Club. An all female club they currently field four senior teams and have a junior section of nine teams aged between 7 and 16. All teams for play and train in Broomfield Malahide.

Malahide Cricket Club ([1]) was founded in 1861 and is situated within Malahide Castle demesne, near the railway station. The club has over 400 members and is open all year round. The club currently fields 18 teams (5 Senior Men's, 2 Ladies, 10 youth and a Taverners side). Both the men's and women's premier teams compete (in their respective leagues) at the highest grade of cricket played in Ireland. From 2009–12 the club's ground was developed into an 11,500-capacity venue and hosted its first one-day international in September 2013 when Ireland played England,[4] with England winning by six wickets after captain Eoin Morgan hit 124 not out on what had been his home ground in his youth.[5] The ground is now the biggest in Ireland. This project has also seen the development of a 2nd "club" pitch on the nearby Lady Acre within Malahide Demesne.

Malahide United A.F.C. ([2]) was founded in 1944 and currently fields 60 schoolboy/girl teams, from Under 7 to Under 18, and 4 senior teams. They have two Academies, the first one catering for the 5-, 6- and 7-year-olds and the second one for the 8-, 9- and 10-year-olds. With over 1,000 registered players, Malahide United is one of the largest clubs in Ireland. The home ground is Gannon Park, which comprises two 11-a-side pitches, one 7-a-side pitch, one 11-a-side floodlit all-weather pitch, one floodlit 5-a-side/warm up all-weather pitch and full clubhouse facilities.

Further pitches are used in Malahide Castle (two 7/9-a-sides and three 11-a-sides) with a further 11-a-side pitch in Broomfield, Malahide

Aston Village F.C. was established in 1994. Their current home ground is Malahide Castle and a local company is their main sponsor. They have three strong senior teams competing in both the U.C.F.L and the A.U.L leagues. Although small in size they still cater for up to 100 senior players with ages ranging from 16 – 43 years of age.

Malahide Rugby Club[6] is located in a modern clubhouse and sports ground opposite the scenic Malahide estuary on Estuary Road. Originally founded in 1922, Malahide Rugby Club had to disband during World War II due to lack of available players. However, in 1978 the club was reformed and now fields three senior men's teams, one women's team, four youth teams and six "mini" rugby teams. 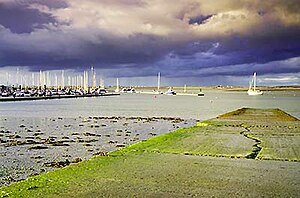 Malahide Golf Club opened in 1892, moving to a new location in 1990. It has a 2-storey clubhouse completed in May 1990, with 1,000 square metres, including bars, a restaurant, conference room and a snooker room. The 17th is a notoriously difficult hole known to locals as "Cromwell's Delight", due to its narrow fairways and dominant bunkers.

Malahide railway station opened on 25 May 1844.[7] It is now one of the northern termini of the DART system, (the other being Howth). The station features a heritage garden and an attractive ironwork canopy. The ironwork in the canopy contains the monogram of the Great Northern Railway ('GNR'), who operated the route prior to nationalisation of the railways.