The National Museum of Scotland in Edinburgh, Midlothian, consists of two neighbouring museums merged formally in 2006: the Royal Scottish Museum (which had borne that name since 1904), and the new Museum of Scotland. The Royal Museum holds collections covering science and technology, natural history, and world cultures, while the Museum of Scotland has collections relating to Scottish antiquities, culture and history. The two connected buildings stand beside each other on Chambers Street, by the intersection with the George IV Bridge, in central Edinburgh.

The two buildings retain distinctive characters: the Museum of Scotland is housed in a modern building opened in 1998, while the former Royal Museum building was begun in 1861 and partially opened in 1866, with a Victorian Venetian Renaissance facade and a grand central hall of cast iron construction that rises the full height of the building. This building underwent a major refurbishment and reopened on 29 July 2011 after a three-year, £47 million project to restore and extend the building led by Gareth Hoskins Architects along with the concurrent redesign of the exhibitions by Ralph Appelbaum Associates.[1]

The National Museum incorporates the collections of the former National Museum of Antiquities of Scotland. As well as the national collections of Scottish archaeological finds and mediæval objects, the museum contains artefacts from around the world, encompassing geology, archaeology, natural history, science, technology, art, and world cultures. The 16 new galleries reopened in 2011 include 8,000 objects, 80 per cent of which were not formerly on display.[2] One of the more notable exhibits is the stuffed body of Dolly the sheep, the first successful cloning of a mammal from an adult cell. Other highlights include Ancient Egyptian exhibitions, one of Elton John's extravagant suits, the Jean Muir Collection of costume and a large kinetic sculpture named the Millennium Clock. A Scottish invention that is a perennial favourite with school parties is the Scottish Maiden, an early form of guillotine.

The history of the museum can be said to begin in 1780 with the foundation of the Society of Antiquaries of Scotland, which still continues, but whose collection of archaeological and other finds was transferred to the government in 1858 as the National Museum of Antiquities of Scotland, from 1891 sharing the same building as the Scottish National Portrait Gallery in Queen Street in the New Town, Edinburgh.[3]

In 1861 construction in Chambers Street of the Industrial Museum of Scotland began, with Prince Albert laying the foundation stone. In 1866, renamed the 'Edinburgh Museum of Science and Art', the eastern end and the Grand Gallery were opened by Prince Alfred. In 1888 the building was finished and in 1904 the institution was renamed the 'Royal Scottish Museum'.[4]

The organizational merger of the National Museum of Antiquities of Scotland and the Royal Scottish Museum took place in 1985, but the two collections retained separate buildings until 1995 when the Queen Street building closed, to reopen later occupied solely by the Scottish National Portrait Gallery. In 1998 the new Museum of Scotland building opened, adjacent to the Royal Museum building, and connected to it. The masterplan to redevelop the Victorian building and further integrate the architecture and collections was launched in 2004, and in 2006 the two museums were formally merged as the National Museum of Scotland.[4] The old Royal Museum building closed for redevelopment in 2008, before reopening in July 2011.[2][5]

The Royal Scottish Museum displayed prank exhibits on April Fool's Day on at least one occasion. In 1975, a fictitious bird called the Bare-fronted Hoodwink (known for its innate ability to fly away from observers before they could accurately identify it) was put on display. The exhibit included photos of blurry birds flying away. To make the exhibit more convincing, a mount of the bird was sewn together by a taxidermist from various scraps of real birds, including the head of a carrion crow, the body of a plover, and the feet of an unknown waterfowl. The bare front was composed of wax.[6] 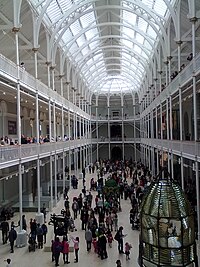 The Grand Gallery of the former Royal Museum building on reopening day, 29 July 2011

Construction was started in 1861 and proceeded in phases, with some sections opening before others had even begun construction. The original extent of the building was completed in 1888. It was designed by civil engineer Captain Francis Fowke of the Royal Engineers, who was also responsible for the Royal Albert Hall. The exterior, designed in a Venetian Renaissance style, contrasts sharply with the light-flooded main hall or Grand Gallery, inspired by The Crystal Palace.[7]

Numerous extensions at the rear of the building, particularly in the 1930s, extended the museum greatly. 1998 saw the opening of the Museum of Scotland, which is linked internally to the Royal Museum building. The major redevelopment completed in 2011 by Gareth Hoskins Architects uses former storage areas to form a vaulted Entrance Hall of 15,000 square feet at street level with visitor facilities. This involved lowering the floor level by 1.2 metres. Despite being a Class A listed building, it was possible to add lifts and escalators.[2]

The building is made up of geometric, Corbusian forms, but also has numerous references to Scotland, such as brochs and castellated defensive architecture. It is clad in golden Moray sandstone, which one of its architects, Gordon Benson, has called "the oldest exhibit in the building", a reference to Scottish geology. The building was a 1999 Stirling Prize nominee.[8]

Detail of chapel from the St Ninian's Isle Treasure 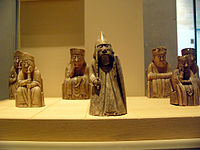 Some of the 11 Lewis chessmen in Edinburgh 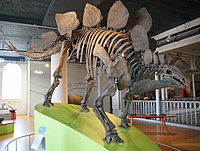 The galleries in the newer building present history in an essentially chronological arrangement, beginning at the lowest level with prehistory to the early mediæval period, with later periods on the higher levels. The Victorian building, as reopened in 2011, contains four zones (each with numerous galleries), covering natural history, world cultures (including galleries on the South Pacific, East Asia, and Ancient Egypt), European art and design, and science & technology. The Grand Gallery contains a variety of large objects from the collections, with a display called the "Window on the World" rising through four storeys, or about 65 feet, containing over 800 objects reflecting the breadth of the collections. Beyond the Grand Gallery at ground level is the "Discoveries" gallery, with objects connected to "remarkable Scots ... in the fields of invention, exploration and adventure".[9] Notable artifacts include: