Castleknock is a village of County Dublin which has become an affluent suburb of Dublin itself, located five miles west of the city centre. The suburb is centred on the old village.

In addition to the suburb, Castleknock is the name of a townland[1] and a civil parish. It sits too at the heart of the Barony of Castleknock,[2] one of the nine baronies of County Dublin.

In a poem relating to the earliest centuries after Christ the origin of the name Cnucha is connected with Conn of the Hundred Battles, and the name is said to have been borne by his foster-mother:

The nurse of Conn who loved this strip of land
Was Cnucha of the comely head;
She dwelt on the dun with him
In the reign of Conn of the Hundred Fights.
Cnucha, the daughter of Concadh Cas,
From the land of Luimncach broad and green,
Died yonder in that house
To the horror of the Gaels.
The woman was buried, a grief it was.
In the very middle of the hill ;
So that from that on Cnucha
Is its name until the judgment.[3]

However, romantic origins only go so far: cnoc is simply the common word for a hill.

Documents from the 12th and 13th centuries refer to the place as Castrum Cnoc, Cnoc and also Chastel-cnoc or Castel-Cnoc.[4] Thus the name may simply be a combination of \Norman and Gaelic, to mean 'castle-hill'.

In chapter 72 of the Life of St. Patrick by Jocelin of Furness it is suggested that when St. Patrick had finished his visit to the City of Dubh Linn he came to Castleknock to try to convert Murinus, the local ruler of the place. Despite his efforts Patrick was unsuccessful and departed while imparting a curse on the King.[5]

According to the Four Masters in the year 726 the death occurred of Congalach of Cnucha.[6]

In 916 the Annals tells that Niall Glindubh of the Northern Uí Neill became High King of Ireland and is referred to as "Niall of Cnucha" which signifies both the ascent of Cnucha (Castleknock) in prominence as well as the descent of Tara as a royal seat. In September 919, Niall gathered the Irish Chiefs and their armies at Castleknock from where they led a fight against the Danes who had regained their power over Dublin. The Battle of Islandbridge, also known as the Battle of Áth Cliath, proved to be Niall's last battle: here he was slain along with five other Irish Chiefs and their armies were subdued.[7]

In 1171, the High King of Ireland, Ruaidrí Ua Conchobair, gathered his forces at Cnucha to counter the Norman invasion of Ireland. King Ruaidrí was comfortable at Cnuch having overcome his Danish vassals in the Kingdom of Dublin some years previously. The siege exerted pressure on the forces of the Cambro-Norman leader, Strongbow, who asked the Archbishop of Dublin, Lawrence O'Toole to negotiate with the High King at Cnucha. Ruaidrí refused Strongbow's offer to recognise him as High King, and commanded Strongbow to depart from Ireland immediately. Maurice de Prendergast, who had accompanied Archbishop O'Toole, observed that the Irish troops were largely inactive and unready for battle, and at this report Strongbow attacked at once. Ruaidrí Ua Concubhair fell back from Cnucha and the other Irish Chiefs returned to their territories, leaving the Normans victorious.[8]

Following the siege, the Normans realised the strategic importance of the location of Cnucha, which looked over the city of Dublin, and consequently in 1177, a feudal barony of Castleknock was created out of the Lordship of Meath by Hugh de Lacy, Lord of Meath who granted it to Hugh Tyrrel. It was held for three and a half knight's fees, owed to the superior Lord of Fingal.

The title and lands of Castleknock were held by the Tyrell family until 1370 when Hugh Tyrell and his wife died of the Plague. It passed by inheritance to the Burnell family. The first Baron, Hugh Tyrrel, gave lands in the barony at Kilmainham to the Knights of St John.

Following the Reformation and the dissolution of the monasteries under King Henry VIII, the Priory at Castleknock was destroyed and in 1609 a church was built on the site for the use of the Church of Ireland. The foundation stone of the church, which is in use today, still on the site of the Abbey, was laid in 1803.[9] The spire was added in 1864 by friends of the late James Hans Hamilton as a memorial to the 1st Baron Holmpatrick of Abbottown and Member of Parliament for the County of Dublin.

Castleknock eventually came to be divided among a number of important families and their country estates. These included the Guinnesses at Farmleigh, and Knockmaroon, the Laidlaws at Abbey Lodge, the Godleys at Oatlands, and the Brookes at Sommerton House.[10] The Earl of Iveagh's principal seat was at Farmleigh until 1999 when it was purchased by the Government of Ireland. It was restored and converted into a State Guest House and opened to the public in 2001. Although they left Farmleigh in 1999, the Guinness family are still present in Castleknock at Knockmaroon House and its Demesne, located on Carpenterstown Road and the seat of Lord Moyne. The Brooke Baronets lived at Sommerton House until they sold it in 1911 to the Laidlaw family who were resident at Sommerton and Abbey Lodge until the 1980s.[11] 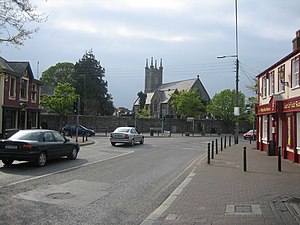 Castleknock Village at the junction of Castleknock Road and College Road

The neighbourhood has developed and extended around the old village, which is a busy commercial centre with several supermarkets and other retail outlets. There are several cafés and restaurants, and a post office. 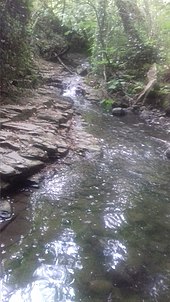 The Royal Canal was completed in 1817 to transport freight and passengers from the River Liffey in the City of Dublin to Longford. Having fallen into disuse at the start of the 20th century the canal is now restored and mostly used for pleasure. The canal's 12th lock is located at Castleknock Marina.

The Diswellstown Stream rises in two branches in the area. One branch comes from Carpenterstown, where Bracken Park Drive now lies, and is culverted for its first stretch. The other comes from south of Park Avenue in Castleknock village, and flows in the open along the western edge of the Castleknock College grounds. The branches come together near the area known as the Sand Holes or Sandpits in Diswellstown, and the stream flows directly south to join the Liffey.[12]

In the Church of Ireland, the church of St Brigid, sited on the ruins of an ancient monastery, is located in the middle of the village.[13]