Dublin Castle, in the heart of Dublin, forms a focus around which the mediæval city developed. It was the seat of power in Ireland from the Middle Ages, and until 1922 it was the seat of the United Kingdom government's administration in Ireland. Today and is a major Irish government complex.

Most of the castle as seen today dates from the 18th century, though a castle has stood on the site since the days of King John (who had an interest in Ireland, having ruled as the appointed Lord of Ireland for many years before becoming King). The Castle served as the seat of English, then later British government of Ireland, and later for the government of the Kingdom of Ireland until its extinction at the Union in 1801. Thereafter the castle remained the seat for the administration of Ireland in the United Kingdom of Great Britain and Ireland. 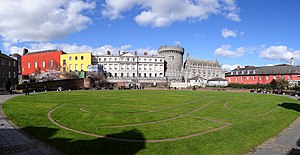 Dublin Castle from the park to the south

After the signing of the Anglo-Irish Treaty in December 1921, the complex was ceremonially handed over to the newly formed Provisional Government of the Irish Free State led by Michael Collins.[1]

The castle today is a major tourist attraction and conferencing destination. The building is also used for State dinners and most significantly, the inauguration of the Presidents of Ireland. 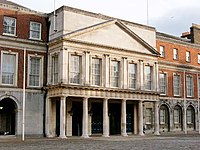 Entry to the State Apartments

Dublin Castle fulfilled a number of roles through its history. Originally built as a defensive fortification for the Norman city of Dublin, it later evolved into a royal residence, resided in by the Lord Lieutenant of Ireland, the representative of the Crown. The second in command in the Dublin Castle administration, the Chief Secretary for Ireland, also had his offices there.

Over the years parliament and law courts met at the castle before moving to new purpose-built venues. It also served as a military garrison.

After the formation of the Irish Free State in 1922, the castle temporarily assumed the role of the Four Courts, whose building had been badly damaged during the Irish Civil War. This arrangement would last for a decade.

In 1938 the Free State's new constitution came into effect, appointing a President, and it was decided that the inauguration of the first President of Ireland, Douglas Hyde would take place in the castle, and the complex has been host to this ceremony ever since. The castle is also used for hosting official State visits as well as more informal foreign affairs engagements, State banquets, and Government policy launches. The castle also serves as the central base for Ireland's hosting of the Presidency of the Council of the European Union, which should occur approximately every 10 years. Two dedicated conference facilities. The Hibernia Conference Centre and The Printworks, were installed for the European Presidencies of 1990 and 2013.

Soldiers at Dublin Castle in 1830 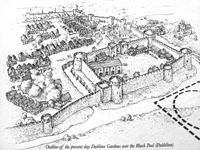 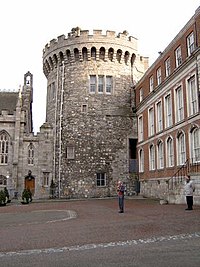 The Record Tower, the sole surviving tower of the mediæval castle (c.1228} and the Chapel Royal

Dublin Castle was first founded as a major defensive work by Meiler Fitzhenry on the orders of King John of England in 1204;[2] 35 years after the Norman invasion of Ireland in 1169. The King commanded that a castle be built with strong walls and good ditches for the defence of the city, the administration of justice, and the protection of the King's treasure.[3] Largely complete by 1230, the castle was of typical Norman courtyard design, with a central square without a keep, bounded on all sides by tall defensive walls and protected at each corner by a circular tower. Sited to the south-east of Norman Dublin, the castle formed one corner of the outer perimeter of the city, using the River Poddle as a natural means of defence along two of its sides. The city wall directly abutted the castle's north-east Powder Tower, extending north and westwards around the city before rejoining the castle at its south-western Bermingham Tower. In 1620 the English-born judge Luke Gernon was greatly impressed by the wall: "a huge and mighty wall, foursquare, and of incredible thickness".[4]

The Poddle was diverted into the city through archways where the walls adjoined the castle, artificially flooding the moat of the fortress's city elevations. One of these archways and part of the wall survive buried underneath the 18th-century buildings, and are open to public inspection. 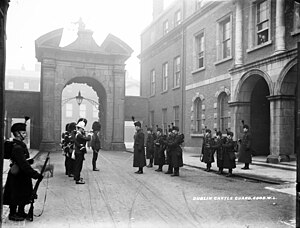 Through the Middle Ages the wooden buildings within the castle square evolved and changed, the most significant addition being the Great Hall built of stone and timber, variously used as Parliament house, court of law and banqueting hall. The building survived until 1673, when it was damaged by fire and demolished shortly afterwards. The Court of Castle Chamber, the Irish counterpart to the English Star Chamber, sat in Dublin Castle in a room which was specially built for it about 1570.

The Castle sustained severe fire damage in 1684. Extensive rebuilding transformed it from mediæval fortress to Georgian palace. No trace of mediæval buildings remains above ground level today, with the exception of the great Record Tower (ca. 1228–1230); it is the sole surviving tower of the original fortification, though its battlements an early 19th-century addition.[5]

In 1907 the Irish Crown Jewels were stolen from the Castle. Suspicion fell upon the Officer of Arms, Sir Arthur Vicars, but scandalous rumours and claims of conspiracy may have compromised the investigation. The jewels have never been recovered.[6] 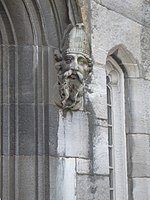 Carved head of St Patrick on the Chapel Royal 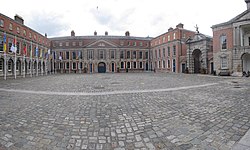 At the very beginning of the Easter Rising of 1916 a force of twenty-five Irish Citizen Army members were able to seize the entrance and guard-room of the Castle, before reinforcements for the small garrison arrived.[7] During the Anglo-Irish War the Castle was the nerve centre of the British effort against Irish separatism. On the night of 'Bloody Sunday' in 1920, three Irish Republican Army members Dick McKee, Conor Clune and Peadar Clancy, were tortured and killed there.[8][9][10]

When the Irish Free State came into being in 1922, Dublin Castle ceased to function as the administrative seat. It served for some years as temporary Courts of Justice (the Four Courts, the home of the Irish courts system, had been destroyed in 1922). After the courts vacated the premises, the Castle was used for state ceremonies. As President of the Executive Council, Éamon de Valera received credentials there from newly arrived ambassadors to Ireland on behalf of King George V in the 1930s. In 1938, Douglas Hyde was inaugurated as President of Ireland at the Castle. Inaugurations of subsequent presidents took place there in 1945, 1952, 1959, 1966, 1973, 1974, 1976, 1983, 1990, 1997 and 2011. President Erskine Hamilton Childers' lying-in-state took place there in November 1974, as did that of former President Éamon de Valera in September 1975.

The castle is a tourist attraction and, following major refurbishment, is also used as a conference centre. During Ireland's presidencies of the European Union it has been the venue of many meetings of the European Council. The crypt of the Chapel Royal is now used as an arts centre, and occasional concerts are held in the grounds of the Castle. The complex of buildings is usually open to the public, except during state functions.

The castle complex also hosts the Chester Beatty Library, in a purpose-constructed facility, and the Garda Museum.

The state apartments, located in the southern range of buildings of the Upper Yard, contain the rooms formerly used by the Lord Lieutenant for personal accommodation and public entertaining during the Castle Season.[11] Today these richly decorated rooms are used by the Irish government for official engagements including policy launches, hosting of State Visit ceremonial, and the inauguration of the President every seven years. The principal rooms of the state apartments include:

This is the grandest room of the state apartments, and contains one of the most important decorative interiors in Ireland. Formerly the ballroom of the Lord Lieutenant's administration, today the room is used for presidential inaugurations. It is one of the oldest rooms in the castle, dating from the 1740s, though its decoration largely dates from c. 1790, including the most significant painted ceiling in Ireland executed by Vincenzo Valdre (c. 1742–1814). Composed of three panels, the ceiling depicts the coronation of King George III, St Patrick introducing Christianity to Ireland, and King Henry II receiving the submission of the Irish chieftains. The state dinner hosted by the President of Ireland to welcome Queen Elizabeth II to Ireland was held here on the evening of 18 May 2011.

Following the disestablishment of the Church of Ireland in 1871, the Order of St Patrick, Ireland's order of chivalry, moved its ceremonial home from St Patrick's Cathedral to St. Patrick's Hall. The banners and hatchment plates of the knights who were living at the time of Irish independence remain in place.

Originally built as the Battleaxe Hall in the 1740s, it was converted to a presence chamber around 1790. The regal decoration dates from that time and from alterations in the 1830s. It contains a throne built for the visit of King George IV to Ireland in 1821.

Built in the 1830s as the principal reception room of the Lord Lieutenant and his household, today this room is reserved in use for the reception of foreign dignitaries. Largely destroyed by fire in 1941, the room was reconstructed with minor modifications in 1964–1968 by the Office of Public Works, making use of salvaged and replicated furnishings and fittings.

Also called the Picture Gallery, and formerly known as the supper room, this is the oldest room in the castle and largely retains its original decoration, having escaped major modification and fire over the years. It dates from Lord Chesterfield's building of the state apartments in the 1740s, and was intended for use as a supper room adjoining St Patrick's Hall and as a personal dining room. Today the room is still used for dining when conferences take place in St Patrick's Hall.

These former private quarters of the Lord Lieutenant were built as five interconnecting rooms running along the back of the building, adjoining the spine corridor that separates them from the state drawing room. Completely rebuilt in the 1960s following fire in 1941, the rooms maintain the original courtly sequence and today are used as ancillary drawing and meeting rooms to the principal apartments. The last dignitary to stay in the royal bedrooms was Margaret Thatcher, who spent a night there with her husband Dennis during one of the European Council meetings held in the 1980s. 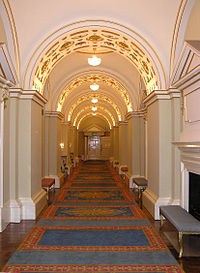 The most architectural space of the state apartments, this expressive, deeply modelled corridor was originally built c. 1758 to the designs of the Surveyor General, Thomas Eyre. Based on the early 18th century corridor of Edward Lovett Pearce in the former Parliament House on College Green, it features a marching procession of vaults and arches which were originally top-lit. Regrettably, an office storey was built over the skylights following complete reconstruction of the corridor in the 1960s as the result of differential settlement with the reconstruction of the adjoining drawing room. The corridor features exact plaster casts of the original arch detailing, and the original doorcases and fireplaces salvaged prior to rebuilding. 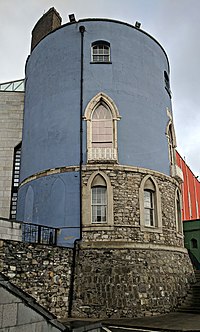 The castle includes towers at two corners; other towers that once existed leave no trace.

The base of the original Bermingham Tower is one of the few remaining parts of the original castle. At the south-west corner of the castle, the tower has a modern upper part. It is unclear which member of the De Bermingham family the tower was named for; perhaps William or Walter or John or Sir Walter.[12]

The Record Tower at the south-east corner is another original part of the castle. It is now the Garda Museum.

The west part of the south outside wall of Dublin Castle

Dublin Castle has appeared in numerous films including: