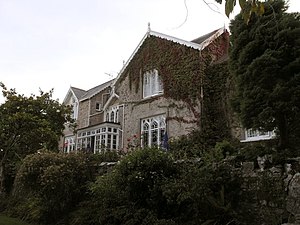 Penally Abbey is an old rectory, now the Penally Abbey Country House Hotel and Restaurant overlooking Carmarthen Bay in the village of Penally, Pembrokeshire, about a mile and a half from Tenby. It is an AA 3-star hotel, located off the A4139 road. It was once owned by the Jameson family of Irish whiskey distillers, but was purchased in 1985 by Berkshire natives Steve and Eileen Warren.[1] 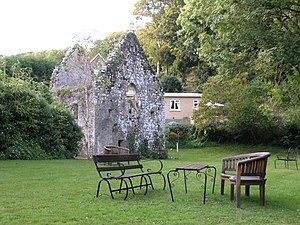 The 12th-century ruined Norman church in the grounds 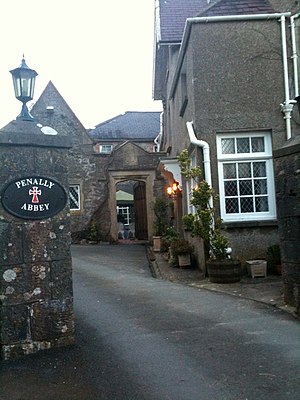 Little remains of the original monastic site except a ruined 12th-century chapel in the grounds.[2] It is called St. Deniol's church and has a Flemish chimney.[3]

The monastery at Penally is believed to date back to around the 6th century when St Teilo and several other saints lived here, and it was located along the pilgrims' trail to St David's in northern Pembrokeshire.[4] A Celtic Cross created by pilgrims in the 10th century is located in Penally village church.

In 1301, the rectory was occupied by the nuns of Aconbury and for some time it housed eight nuns and their prioress until the Dissolution of the monasteries in 1534 when the property and lands were seized by the Church.[4] The rectors of the church at Penally used the building as their place of residence until the 1820s, when a new vicarage was erected. In the early 1800s the ruined chapel became a fernery and later a Victorian folly.[4]

In the early 20th century, Penally Abbey became a private residence and it was occupied by the famous Jameson’s Whiskey family from 1916 until 1925.[4] It then housed numerous military personnel in subsequent decades, becoming a country club briefly in the 1950s.[4] In 1985, the abbey was converted into a hotel.[4]

Penally Abbey is built from Pembrokeshire limestone and consists of three buildings.[5] It is noted for its large gothic windows and its ogee-headed doors.[3] It contains 10 double rooms, 1 single, 1 suite (12 rooms in total[6] )and also contains 4 rooms in the coach house. The bedrooms are lavishly furnished and decorated with antiques and period furniture and many of contain four-poster beds.[7] It is set in nearly six acres and features a small indoor swimming pool.[1]