North Petherwin is a village in the Black Torrington Hundred of Devon; the chief village in the projection of Devon which trespasses westward over the River Tamar, surrounded by Cornwall. The village stands five miles north-west of Launceston in Cornwall, on a ridge above the River Ottery valley, which river, to the south of the village, forms the county border.

Historically, the Dukes of Bedford have been major land owners in the parish. As well as the church town, settlements include Hellescott, Brazzacott, and Maxworthy.

The village has a school, North Petherwin Primary School, dating back to 1878 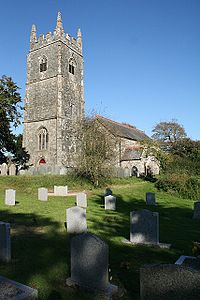 The parish church is dedicated to St Paternus or Padarn, as is that of South Petherwin. It is unusually grand for a small village church. It was described in White's Devonshire Directory of 1850 as: ... an ancient structure, with a tower and five bells... (containing)... memorials of the Yeo and other families.[1]

The north aisle is Norman and the south Perpendicular and many of the windows, including those of the clerestory, are 13th century in style. There is some old woodwork including a communion rail dated 1685.

The parish is within the Diocese of Truro.

The Tamar Otter and Wildlife Centre is North Petherwin's main tourist attraction. As well as having European and Asian Short Clawed otters it has a duck pond, a nature trail where owls can be seen, a restaurant area and a gift shop.[2]