Newgate Street is a village in Hertfordshire, on a gentle hill in the midst of lanes north of Cuffley. Cheshunt is down the road to the east, beyond Cheshunt Common, and six miles northeast is the county town, Hertford. Newgate Street is a small village of some 400 souls.

It is a village for the prosperous commuter; a foreign restaurant, two pubs (The Crown and The Coach and Horses) and a hotel (Ponsbourne Park Hotel). It also has a small town hall, two outdoor tennis courts and a 9-hole golf course belonging to the hotel.

The village has its own church and a church school, both known as Ponsbourne St Mary's. The church is part of the Hartford Hundred group of parishes. The name of the parish is "Ponsbourne", nor "Newgate Street" reflecting the original village to the new. Ponsbourne Park was long the dominant estate hereabouts and country seat. The manor house has since become a swish country hotel. 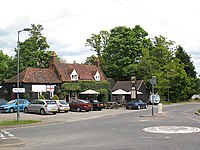 The Coach and Horses public house

Originally in the Manor of Tolmers, the present Tolmers Park House dates from 1761. Since First World War it has been used as a military hospital, a girls' boarding school, a geriatric hospital and has now been converted to luxury apartments. Part of the estate became Tolmers Scout Camp in 1940. The house lies just to the South-West of the village.