Cheshunt is a large town in eastern Hertfordshire, with a population of around 52,000 according to the United Kingdom's 2001. It is a dormitory town, part of the London commuter belt and forms a central component in a stretch of townscape contiguous with the London conurbation which here creeps up the western side of the valley of the River Lea.

Commuters benefit from Cheshunt railway station; the town is 13 miles from Charing Cross in London, making it one of the closest parts of Hertfordshire to Central London.

The Greenwich Meridian passes to the east of Cheshunt.

Services in Cheshunt include the Brookfield Centre, which includes many well known national chain shops. There is a Marriott Hotel nearby, and the town centre includes a wide variety of smaller shops.

Located in the Lea Valley, Cheshunt has access to the Lee Valley Park. The park is accessible at many points, one being extremely close to the town's railway station at Windmill Lane.

The town name comes from the Old English name (as recorded in the Domesday Book) for the area, Cestrehunt, which is of unknown origin. It has been suggested that it is form the Old English ceaster (in modern form, "chester") referring to a fortified town.

Cheshunt is on the old Roman road known as Ermine Street, the main Roman road leading north from London. This origin was investigated by the television archaeology programme Time Team.

Before the Norman Conquest, the manor of Cheshunt was held by Edith the Fair, but William I granted it to Alan of Brittany.

The parish church of St Mary-the-Virgin was first recorded in a charter of 1146, but was entirely rebuilt between 1418 and 1448 with a three-stage tower topped by an octagonal turret.[1]

Before she acceded to the throne as Elizabeth I, Princess Elizabeth lived at Cheshunt in the care of Sir Anthony Denny, after she left Queen Catherine Parr's household in 1548.[2] In 1712 a rather different ruler, Richard Cromwell, Lord Protector of the Commonwealth, died here.[3]

In 1825, Cheshunt was the location of the Cheshunt Railway. Running from the town's High Street to the River Lea near the present-day Cheshunt railway station, this 0.75 mile horse-drawn line was the first passenger-carrying monorail and the first railway line to be built in Hertfordshire.[4][5]

The town's Bury Green neighbourhood was once the home of singer Cliff Richard. Lotus Cars as well as the nationally famous Debenhams were also founded in Cheshunt, and the headquarters of Tesco, the UK's largest and most profitable supermarket chain, is also located here. In 2002, Cheshunt hosted the only officially licensed European BotCon convention ever.

At 8.00am on 12 August 1944 a Consolidated B-24 Liberator bomber belonging to the United States Army Air Forces 392nd Bombardment Group (Heavy) from RAF Wendling crashed next to Maxwells Farm near Cheshunt killing all ten crew.[6][7] The B198 which runs near the crash site has been renamed Lieutenant Ellis Way after the pilot had managed to avoid crashing into the nearby town, one of the firemen who attended the scene has recently secured funding for a permanent crash memorial at the scene.[8] There is currently a memorial which has been set up along the named road, near St Mary's High School which is now situated in the immediate area.

Up until 2004, Cheshunt was home to the famous Temple Bar, which was moved from London at the turn of the 19th century. The gateway was re-installed in the City of London at Paternoster Square on the north side of St Paul's Cathedral. 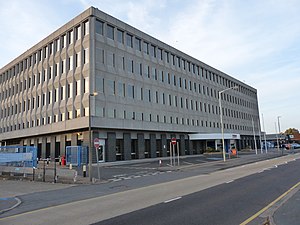 Cheshunt's best-known employer is Tesco, whose head office has been in Cheshunt for many years. A small store has been in the town centre for many years and is still open today, together with an adjacent "Home 'n' Wear" store (now closed).[9] In 1983 a new out-of-town Tesco store located to the north of the town opened, named "Brookfield Farm". It later expanded, and a branch of Marks & Spencer built next door, the entire estate renamed "The Brookfield Centre".

Until the late 1960s the main land use around Cheshunt was for its nursery industry, and many new techniques for growing under glass were developed here. Thomas Rochford had a large concern here, although now almost all the glasshouses have been re-developed into housing estates. This is often reflected in the names of the roads or estates, such as Rosedale or Thomas Rochford Way. A small amount of nursery trade survives to the west of the town. The neighbouring village of Goffs Oak still has a large number of nurseries as well as a large garden centre. 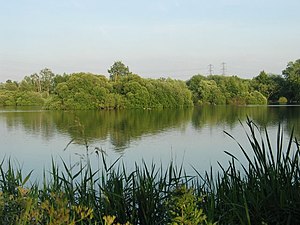 The River Lee Navigation passes through Cheshunt and was used for the transport of flowers and crops to the London markets for many years until road transport became more viable. A wharf existed just east of the railway on the site now occupied by Herts Young Mariners Base. The Youth Hostel was built on the site of the derelict open-air swimming pool.[10] Photos of the pool are exhibited at the hostel.

"Cheshunt Compound", a fungicide developed at the Cheshunt Research Station was widely used by amateur and professional gardeners but has been withdrawn from sale in the UK since November 2010 and it is no longer legal to use it.[11] It was a mixture of copper sulphate and ammonium carbonate.[12]

From the end of Second World War a large area of the River Lea flood plain was used for sand and gravel extraction which resulted in the creation of the now mature lakes which are popular with anglers, birdwatchers and naturalists. The area now forms part of the 1,000 acre River Lee Country Park and the Turnford and Cheshunt Pits SSSI.

The Sustrans National Cycle Route 1 passes through Cheshunt as part of its route connecting Dover to Shetland. 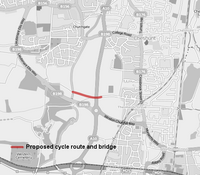 Route of the cycle link and new bridge

As part of the Connect2 project a new cycle link over the A10 was proposed in 2007.[14] The scheme involved the building of a new cycle bridge over the A10 and connecting paths to link Theobalds Lane with Lieutenant Ellis Way. The bridge was opened in 2010 as the "Paul Culley Bridge" after a late local civil servant.[15] £500,000 of this cost is funded by the Big Lottery Fund via the Connect2 project.[16]