The Nene Valley Railway is a preserved railway running 7½ miles along the course of the River Nene in Huntingdonshire and Northamptonshire. Its termini are Peterborough Nene Valley and Yarwell Junction, both on the Huntingdonshire side of the river. As well as stations at each terminus, there are currently three stops en route: Orton Mere, Ferry Meadows and Wansford.

The line's eastern terminus at Yarwell Junction and its headquarters at Wansford are in the northernmost bulge of Huntingdonshire surrounded by the River Nene (the county's northern border), and east of Wansford the line crosses the Nene to the Soke of Peterborough, crossing back to enter the Huntingdonshire towns which form Peterborough's southern suburbs.

The line was built in 1847 as part of the London & Birmingham Railway's line from Blisworth in Northamptonshire to Peterborough; the first railway to reach that city. In the late 19th century, the London & North Western Railway (which had absorbed the L&BR) built a new line that turned Wansford, previously an unimportant village station, into a major junction, and later it was joined the Great Northern Railway's line via Sutton, Southorpe and Barnack to Stamford.

Between 1900 and the 1960s, the line formed an important connection from Norwich, Cambridge and eastern counties to Northampton and the Midlands, but it did not escape the Beeching Axe. Services to Northampton and Rugby ceased in 1964 and 1966 respectively, and it closed to freight traffic in 1972.

In 1968, the Rev. Richard Paten had bought British Railways Standard Class '5' 4-6-0 locomotive, number 73050, for its scrap value of £3,000, intending had been to exhibit it outside Peterborough Technology College as a monument to Peterborough's railway history. However, the locomotive was found to be in good working order, and there was much opposition to the idea of the engine's being "stuffed", and it was decided to restore it to full working order.

On 28 March 1969, the Peterborough Branch of the East Anglian Locomotive Society was formed, with the intention of purchasing and restoring a single locomotive but by 1970, the branch was strong enough to operate independently as the Peterborough Locomotive Society (PLS). In 1971, 73050 was moved to the British Sugar Corporation's sidings at Fletton, Huntingdonshire, where it was joined by Hunslet 0-6-0 locomotive 'Jack's Green'. Later that year, the PLS held a meeting at which the group's name was changed to 'Peterborough Railway Society' and the idea of the Nene Valley Railway was formally launched. 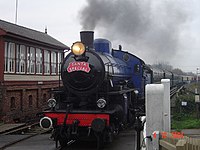 A 'Santa Special' on the Nene Valley Railway

In 1974, the Peterborough Development Corporation bought the Nene Valley line between Longville and Yarwell Junctions and leased it to the Peterborough Railway Society to operate the railway. The Society intended was to work the line with British locomotives and stock, but few were to be found that they might acquire. In 1973, PRS member Richard Hurlock had approached the society for a home for his ex-Swedish railways 2-6-4T class S1 oil-fired locomotive, number 1928, but its European loading gauge (height and width) were thought too large for British railways. In 1974 a feasibility study showed that only one bridge would have to be demolished to allow the running to continental loading gauge, and some reductions also to the width of the platforms. In 1973, British Rail gave the Society permission to use Wansford signal box and, in September of that year, the first items of stock arrived at the PRS depot.

Before the stock could be moved from the BSC depot to Wansford, the missing 400 yards of the Fletton Loop had to be rebuilt, allowing access to the Nene Valley line. The track was completed in March 1974 and the stock moved to Wansford in time for the Easter weekend, when the new 'Wansford Steam Centre' opened for the first time. Between 1974 and 1977, the line was upgraded to passenger-carrying standard and the first passenger train ran on 1 June 1977, hauled by the 'Nord' - a French locomotive and '1178' - another Swedish tank engine, pulling a set of ex-BR electrical multiple unit coaches owned by the Southern Electric Group.

In the early 1980s, the NVR decided to extend its running line, which then terminated at Orton Mere station, along the route of the original Nene Valley Line to a new station west of the East Coast Main Line, adjacent to the new Railworld Museum. Peterborough Nene Valley opened, for the first time, on the Late Spring Bank Holiday weekend of 26 May 1986. This extended the NVR to its current length, 7.5 miles.

Proposals made by the Society or others include:

An attempt was made to extend the Nene Valley Railway to both Elton railway station and Oundle back in the 1990s, but was abandoned for financial reasons. The station site is still intact but the buildings have been demolished since closure (with whole/entire land still free from redevelopment to a new site at Oundle.

The new station building at Yarwell 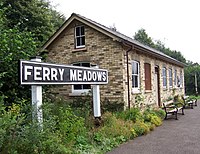 Ferry Meadows, once a goods office 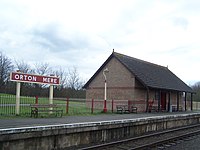 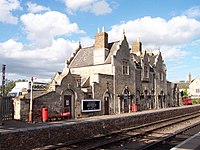 The stations of the Nene Valley Railway, west to east, are:

The Nene Valley Railway as a filming location

The line has been a location for a number of films, TV shows, and music videos.

Secret Army, the BBC's wartime drama, was filmed between 1977 and 1979, many sequences for the were filmed here, principally at Wansford station.

In Spring 1989, the rock band Queen shot a video at the railway called "Breakthru" that reached number 7 in the British charts. They are filmed on a steam train (a GWR 2884 Class, No.3822 from Didcot, repainted) that was given the name 'Miracle Express' after the title of their 1989 album The Miracle.

In November 2009, ITV spent three days at the Nene for their remake of 'Murder on the Orient Express' for Agatha Christie's Poirot Series. They used the BR Standard Class 5 73050 'City of Peterborough' numbered '305' and the Belgian Coaching Stock, with most filming taking place at Ferry Meadows.

In September 2010, scenes were filmed for the BBC soap opera, EastEnders, on the line, in which characters Janine Butcher and Ryan Malloy were trapped on a level crossing with a train approaching them.