Barnack is a village in the Soke of Peterborough in Northamptonshire. Unlike many of the places of the Soke, it has not been absorbed into the city's new town development but remains a fine, rural Northamptonshire village.

This is a village with two great claims to fame and its influence is seen across the northeast of the county in cottages and churches and far further abroad, for Barnack is the source of Barnack rag, the distinctive orange building stone used hereabouts and in some of the great abbeys and cathedrals of the Middle Ages; Peterborough Cathedral and Ely Cathedral are built of it, as is Barnack's own church and the houses of the village. The second claim to fame is the parish church, a well preserved Anglo-Saxon church. The village is also the site of an unusual early Bronze Age burial.

Barnack is in the northwest of the Soke, 3½ miles southeast of Stamford. The parish includes the hamlet of Pilsgate about a mile northwest of Barnack. The 2011 Census recorded a parish population of 931.

The parish church of St John the Baptist has an 11th-century late-Saxon tower.[1]

The interior of the church includes a high-quality late Saxon Romanesque sculpture of Christ in Majesty.[2] The tower is topped by what may be one of the earliest spires in Britain.[1]

This is one of several fine Anglo-Saxon churches in Northamptonshire, of which the largest is at Brixworth, though Barnack has the more intimate setting.

The Barnack burial is an important early Bronze Age find. It comes from a complicated monument which was expanded and altered on at least three different occasions. The original burial was very rich for the period, but was covered by only a small barrow. Later additional burials and cremations were cut into the barrow, and it was enlarged twice. Probably at the same time, three concentric ditches were dug around the barrow. The final monument contained at least 23 bodies and had a diameter of 165 feet.

The Barnack Burial in the British Museum

When gravel quarrying threatened the barrow in 1974, the decision was taken to excavate. The objects recovered were donated to the British Museum, but replicas are displayed in Peterborough Museum and Art Gallery.

The primary burial was of a man aged between 35–45 who died at some time between 2330 and 2130 BC. The grave goods of this burial are unusual; there is a large "beaker" pot and a copper dagger, common items found in graves of the time. There was a piece of oak charcoal. It is unknown what this was for and no one has been able to make a good guess. There was an unusual pendant made of either bone from a sperm whale or walrus ivory. However, the most unusual item was a stone wrist-guard which has eighteen drilled holes, each one of which was filled with a foil-thin disc of gold. Fewer than a hundred such wrist-guards have been found in Great Britain and the example from Barnack is arguably the finest. 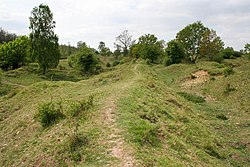 The Hills and Holes, now a nature reserve

Oolitic Lincolnshire limestone, including some called "Barnack rag", was a valuable building stone first used by the Romans. Quarrying continued in the Middle Ages when the abbeys at Peterborough, Crowland, Ramsey, Sawtry and Bury St Edmunds all used Barnack stone, and the monasteries were frequently in dispute over the rights to it. Blocks of stone were transported on sleds to the River Welland and loaded onto barges on which they were taken down the River Nene and the Fenland waterways. Most notably, Barnack stone was used to build Peterborough Cathedral and Ely Cathedral.[3] Barnack stone was also used extensively for buildings in Stamford.[4]

It is likely that the stone was also carved in the village. A possible Barnack school of Anglo-Saxon sculpture has been identified.[5]

The stone was used for numerous buildings in Barnack itself, most notably the parish church. Another notable example is 7 Station Road, which is a 13th[3] or 14th century house remodelled in the 16th or early 17th century.[6] It is a Grade II* listed building.

The best Barnack stone had been worked out by about 1460, but after the dissolution of the monasteries, supplies became available from demolition of the Fenland monasteries and was re-used in Cambridge colleges.[7][8] Lesser-quality Barnack stone continued to be quarried until the 18th century,[3] and in 1825 it was quarried as roadstone for the Great North Road.[4]

After the useful stone had been removed, the bare heaps of lime-rich rubble were gradually covered by a rich carpet of wild flowers, such as the pasque flower and pyramidal orchid, which can be seen today. The quarry area, now a National Nature Reserve called the "Hills and Holes"[3] or "Hills and Hollows". 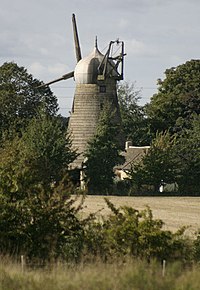 Barnack water mill was built in the 18th century.[9] Its undershot water wheel is in situ but none of the mill's interior machinery remains.[9]

In 1846 the Syston and Peterborough Railway opened. It included a station in the parish about a mile north of Barnack, nearer Uffington, Lincolnshire than Barnack and so initially called Uffington station. The Syston – Peterborough line was absorbed by the Midland Railway, which in 1858 renamed the station Uffington and Barnack. British Railways closed the station in 1952, and that line's nearest station to Barnack is now Stamford. The disused Uffington and Barnack station survives and is a listed building.[11]

In 1867 the Great Northern Railway opened a branch line linking Stamford and Wansford, with a Barnack railway station on the east side of the village. The London and North Eastern Railway absorbed the GNR in 1923 and closed the branch line in 1929.

Barnack has one public house, the Millstone Inn. There is a primary school, General store/village shop and post office, two bed and breakfasts, an MOT test centre and garage. There are also several other small businesses and an agricultural goods supplier.