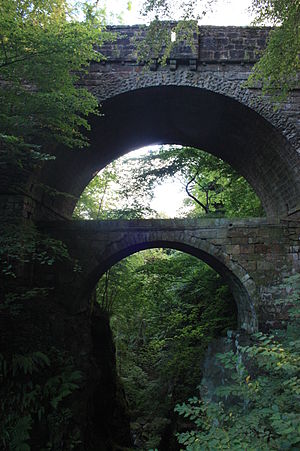 Rumbling Bridge, the double bridge which gives its name to the village 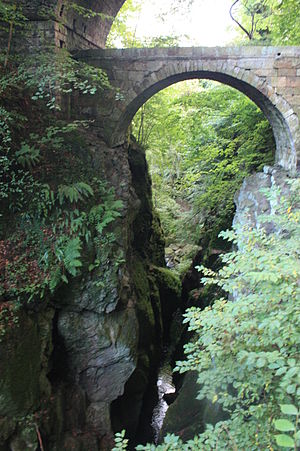 Rumbling Bridge, the deep narrow gorge beneath the bridge which causes the rumble

Rumbling Bridge is a tiny village in Perthshire, nestling under the Ochil Hills, where the A823 road leaves the A977, perched on the edge of the River Devon gorge.[1] It lies between Muckhart and Crook of Devon with Powmill half a mile to its south. It is named after an unusual double (arguably treble) bridge, which gives off a distinctive rumbling reverberation at lower levels.

The "lower" bridge, without parapets, was built in 1713[1] by William Gray, a mason from Saline. It is 22 feet long and 11 feet wide and 86 feet above the average water level. However, an ancient bridge preceded this and is still (just) visible. It takes the form of a single large stone slab over the river at the very base of the gorge, so serves no advantage to vehicles, and was simply a means of crossing for pedestrians without getting their feet wet.

The second bridge or Upper Arch (120 feet above the river) was constructed 34 feet above it in 1816[1] and "gave it an easier gradient"[2] by removing the steep slope down to the old bridge. 1816 was a dramatic year as ... 1816. "On 18 March, happened the greatest flood ever heard of or seen in Kinross; all the burns were brimfull;"[2] and later "On 13 August a smart shock of earthquake was felt throughout Kinross at 11 o'clock at night. Plates rattled on shelves; chairs moved about and were thrown over; beds shook, &c."[2] There was also a "wet and late harvest"[2] during which there was snow on four different occasions from five to six inches deep.'

Unlike the Rumbling Bridge over the River Braan near Dunkeld, the River Devon cannot be canoed. There is a good, well maintained path round the upper gorge built by the armed forces. About 350 yards above the bridges is the Devil's Mill waterfall. At the Devil's Mill, "the river, after running in a rocky channel with a rapid descent, enters a deep basin formed in the rock ; from this basin it descends into a cavity below, where the water is whirled about with great violence, and, constantly beating against the sides of the rock, produces a sound" like that made by the machinery of a mill in motion. It is best seen from the south bank."[3]

Taking the footpath east from here will take you right through to the Crook of Devon. From west of the Rumbling Bridge there is no safe path although "the best view of the finely wooded cliffs connected by the Rumbling Bridge, is from a gentle eminence immediately below and opposite to it, upon the north bank. The river, both above and below, bounding from rock to rock, each forming a little cataract, creates a constant tumbling noise; hence the name of the Rumbling Bridge. From the clefts in the face of the rock grow bushes and trees, among which daws and hawks nestle, and from these they are incessantly sporting, thereby giving a pleasing animation to the scene."[3]

The lower gorge is not easily accessible although Caldron Linn (one mile below Rumbling Bridge), accessed through fields by Powmill, is worth the effort and the 150 ft slippery descent to reach it.

The gorge is fairly dangerous. In May 1849, "James Anderson, a boy while bird nestling on the high rocks to the west of the Rumbling Bridge, lost his hold and fell [downwards] of a hundred feet, into the Devon. When taken up [his] life was quite extinct."[2] And on 6 August 2002, after heavy rains and flash flooding, 16-year Alix-Ann Aisin MacKay fell into the gorge and died whilst trying to cross it with friends.

It was a very popular tourist destination even before the railway was built. The clear winding Devon," was celebrated by Robert Burns in his beautiful lyric, "The Banks of the Devon." Miss Charlotte Hamilton (afterwards Mrs. Adair), was the "Loveliest flower on the banks of the Devon" whom Burns met during a visit to the Cauldron Linn on Thursday 30 August 1787. She was at that time residing at Harvieston, near Dollar.