Monifieth is a town in Angus, standing on the north bank of the Firth of Tay. In 2008, the population of Monifieth was estimated at 8,220, making it the sixth-largest town in Angus.

The presence of a number of class II and III Pictish stones points to Monifieth having had some importance as an ecclesiastical centre in the early mediæval period. The lands were a possession of the Céli Dé monastic order until they were granted to the Tironensian monks of Arbroath Abbey in the early 13th century. Until the early 19th century, Monifieth remained a small village but grew rapidly due to the expansion of the local textile industry.

Monifieth can be considered a dormitory town for its closest city, Dundee, which is 6 miles to the west.

The name Monifieth is generally taken to derive from the Gaelic Monadh Feith, meaning "Hill of the deer".[1] An alternative etymology Monaich Fother, meaning "Monks' Land", has been suggested, which holds some appeal due to Monifieth's early status as a possession of the Céli Dé monastic order.[2] 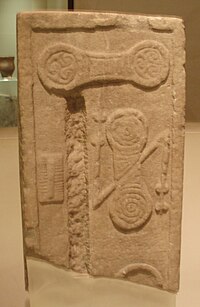 Pictish stone, now on display at the Museum of Scotland

The earliest evidence for occupation of the area surrounding Monifieth dates to the Mesolithic period. Midden pits of that age have been found nearby at Stannergate, and worked flints apparently of that age have been found at Balmossie.[15] More tangible evidence for settlement can be found from the Neolithic period, for example with the Cursus monument, identified from cropmarks near Woodhill, between Monifieth and Carnoustie.[16] This cursus is of a similar scale to the well characterised, mid 4th century BC enclosure found nearby at Douglasmuir near Friockheim.[17] Numerous stones incised with cup and ring marks have also been found in the surrounding area.[18][19][20]

Approximately a mile to the north of Monifieth lies Laws hill, on which lies the Iron Age ruins of a broch and vitrified fort.[21] These ruins are much reduced as the stone from their walls has been used on the estate for construction of dykes and drains, well into the 19th century,[22] and while very little remains of the structure today, tradition recorded in 1842 attests to the walls being 5 feet tall at the beginning of the 19th century.[23] Artefacts found at and around the site include a quantity of gold coins, iron spear heads and a stone lamp.[24]

One artefact found near Laws Hill (but now lost and only known from an illustration) is that of a Pictish crescent plate, found in a cist grave which incorporated a later Norse Younger Futhark runic inscription (MKITIL:THA[...]).[25] This find is particularly intriguing in light of the paucity of Viking archaeology in this part of Scotland.[26]

Domestic remains from the late Prehistoric period can also be found in abundance in the area. Perhaps most well known are the souterrains at Carlungie and Ardestie,[27] but cropmarks point to other settlements of that age, for instance at Woodhill.[28]

Prior to the thirteenth century, the church and lands of Monifieth were possessions of the Céli Dé monastic order.[29] The church was endowed to the recently founded Tironensian abbey of Arbroath by Gille Críst, Mormaer of Angus, around 1201-1207,[3] and the lands to the south of the Church (now much reduced in size due to erosion) in 1242-1243 by Matilda, Countess of Angus.[29] A hoard of 700 coins dating to the reigns of Edward I and Edward II were found in this area in 1854.[30]

The present building of St Rule's Church (built 1812) originally incorporated three Class II and Class III Pictish/Early Mediæval sculpted stones, recycled as building stones, including one that had previously been used in the pre-reformation building it replaced.[31] These stones were removed in the mid 19th century and, along with a fourth stone found in an adjoining garden, were donated to the National Museums of Scotland in 1871.[31] They represent some of the latest Pictish era monuments and can be confidently dated to the late 9th/early 10th centuries.

Monifieth remained a small village, comprising a number of turf huts until the early 19th century.[29] In the eighteenth century, the economy of the parish was mainly dependent on agriculture. Other industries included quarrying, weaving within the home and the start of manufacturing of linseed oil at a water-powered mill by the Dighty burn,[32] supporting a small community, 'Milltown',[11] later named as 'Milton of Monifieth'.[33] Although Monifieth had no harbour, cargo was off-loaded from vessels on Monifieth Sands (in the relatively sheltered Firth of Tay) at low tide and horse-drawn vehicles would move the cargo to nearby destinations.[2]

During the 19th century, the village gradually expanded following the introduction of larger scale industries to the area, including manufacture of machinery for flax mills in 1811.[29] James Low and Robert Fairweather had set up their foundry in the village at the start of the nineteenth century and in 1815 developed the first carding machine for flax tow in the area. With the growth of the textile industry in Dundee and Angus the business grew rapidly, and, by the late nineteenth century, James F Low & Co Ltd was producing a wide range of machines used for the processing and spinning of jute, flax and similar fibres. As well as building machinery for local use, the firm attracted orders from across the world and by the 1880s the Monifieth Foundry employed about 300 workers.[34] The expansion of Monifieth's industrial economy was aided by the opening of the Dundee and Arbroath Railway on 6 October 1838. This railway, which was originally intended only as a local line, was constructed with an unusual gauge of 66 (shared only with the Arbroath and Forfar Railway),[35][36] later being converted to standard gauge when it was incorporated into the national Rail system.[37] Between 1861 and 1901, Monifieth's population more than trebled; from 558 to 2,134 and in 1895, Monifieth was registered at Forfar Sheriff Court as a burgh.[2]

A tramway service was introduced in 1905, with cars journeying into Dundee City centre at regular intervals. This service was welcomed by the many who travelled daily either from the Burgh into the City on business, or the many hundreds who commuted daily to work in the factories and mills.[2]

In 1905 Monifieth gained a Cottage Hospital via a provision made in the will of the Reverend James Gerard Young DD. The Reverend Young had been Minister of Monifieth Parish Church from 1855 until his death in 1899. The funds he left were used to establish the Gerard Trust which managed the Gerard Cottage Hospital from its opening until it passed into the control of the new National Health Service in 1948. The hospital closed in 1969 and subsequently became Mary's Residential Home for the elderly.[38]

During the Second World War the Monifieth Foundry was used for the production of war supplies including bombs and aircraft parts.[34] 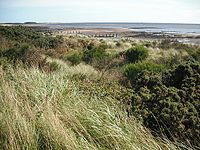 Monifieth stands on the north bank of the Firth of Tay, on land immediately to the west of the Buddon Ness, 6 miles east of Dundee, 10 miles WSW of Arbroath, and 11 miles south of Forfar. The built-up area occupies a roughly rectangular shape 1.2 miles long by 0.7 miles wide, aligned in an ENE direction. The land is relatively flat, rising gradually to around 150 feet to the north of the town at South Grange.

The town incorporates a number of former villages and hamlets, including Ashludie, Milton and South Grange. To the east is a 2.7-mile expanse of rural land between the town and the village of Barry and town of Carnoustie. This rural area includes a number of farmsteads and hamlets, including Lucknow, West Cotside, Ardestie, Balhungie and Woodhill, as well as the Monifieth golf courses and Panmure golf course.

To the south of this, on the southern side of the railway, is the peninsula of the Buddon Ness, on which lies the Ministry of Defence owned Barry Buddon training camp. This land is classified as a Site of Special Scientific Interest and a Special Area of Conservation.[39][40]

The Buddon Ness is a triangle of land on the estuary of the River Tay, where it is prone to erosion, and the position of both the west- and east-facing shores have changed considerably over the years.

To the north of the town runs the A92, between Dundee and Arbroath. Beyond this lie the farms of North Grange, Balmossie and Ardownie and Ethiebeaton retail and leisure park, as well as Roman Hill, Gallow Hill and Laws Hill. The Edinburgh to Aberdeen railway line runs along the South of the town, separating the built-up area from the Blue Seaway leisure area and the two caravan sites. The A930 runs through the town east to west from Barry to Barnhill.

To the west side of the town there is the Dighty Water. It begins in the Sidlaw Hills and runs 15 miles east-southeast where it meets the Firth of Tay. At least two mills are known to have existed beside the burn: the Milton Mill and the Balmossie Mill. The Milton Mill, which opened in 1788 as a flax spinning mill, was part of the Milton industrial area. It is the oldest water-powered flax mill in Angus.[41] The mill, which is a category B listed building, suffered significant fire damage in June 2006. Initially, the mill was not permitted to be demolished but, in April 2010, it was agreed by the Angus Development Standards Committee that the building was "beyond saving" and demolition was permitted.[42] Demolition of surrounding buildings was already under way, clearing the way for a housing development.

The Balmossie Mill, the smaller of the two mills, was a water mill. Remains of a water wheel and machinery are evident. The exact date of the building is unknown but in 1692 two local men were recorded by local newspapers for poaching. The Balmossie Mill is a category B listed building.[43]

Continuing eastwards from the Milton Mill, along Ferry Road and Maule Street towards the town centre, Monifieth's war memorial is situated. The memorial was dedicated in 1921 and was built by Charles Soutar. The design includes a sculpture of an angel warrior figure with a sword and laurel wreath.[44] Invertay House, located further along Maule Street on the south side of the road, was built in 1878 and opened as Monifieth Public School. Today, the building houses offices. Opposite Invertay House, on the north side of the road, is the Gerard Hall. The hall was built in 1882 for Sunday School pupils of the adjacent St Rule's Parish Church.