Middleton Hall is a country houe in northern Warwickshire, dating back to the Middle Ages. The house is a Grade II* listed building.[1]

The house stands to the south of Fazeley and Tamworth and on the opposite side of the A4091 road from Middleton village. 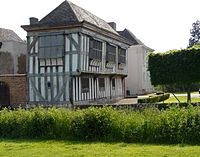 In the mid-17th century the hall was home to Francis Willughby, the mathematician and naturalist, and his descendants the Middleton barons. The hall was also for a time the home of the parson-naturalist John Ray. The Georgian west wing dates from the late 18th century. In 1812 the estates and the barony passed to Henry Willoughby of the Birdsall, Yorkshire branch of the family and Middleton declined in importance in family terms. The Middleton and Wollaton estates were sold in the 1920s.

The hall was allowed to fall into disrepair over many years and since 1980 has been restored by a charitable trust. Much work has been done on the main hall, walled garden, Tudor barn complex (now craft shops) and a 16th-century jettied building, which was close to collapse before restoration commenced. The stables and lodging block are on Historic England's Heritage at Risk Register due their poor condition.[2]

The surrounding 40 acres of land include two walled gardens, the largest man-made lake in Warwickshire, much woodland and Middleton Lakes RSPB reserve.[3]