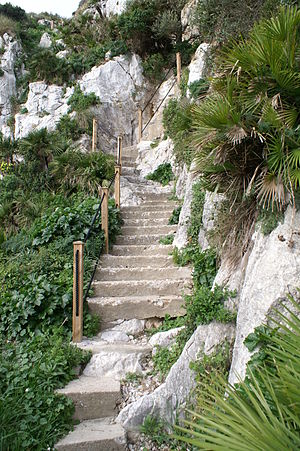 The Mediterranean Steps climb up the Upper Rock of Gibraltar to close to the very summit. They were cut by the army during Napoleonic War but now provide a recreational footpath and nature trail.

The steps form part of a network of footpaths about the Upper Rock, and as a route they link Martin's Path to Lord Airey's Battery near the summit of Rock at O'Hara's Battery. The path offers views over the Strait of Gibraltar, Windmill Hill, Europa Point, the Great Sand Dune, Gibraltar's east side beaches, the Mediterranean Sea and the Spanish Costa del Sol. 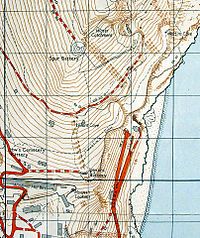 The Mediterranean Steps were built as part of the military communications system to allow access to the garrison's various defence posts[1] at the southern end of the Rock. At the highest point of the steps are the two 9.2 inch guns of Lord Airey's Battery and O'Hara's Battery. Other gun emplacements and ancillary buildings dating back to Second World War are evident along the route.[2]

The steps were restored in 2007[2] by the Bonita Trust, the Government of Gibraltar and the Gibraltar Ornithological and Natural History Society.[1]

The steps zig-zag up the Rock from the end of Martin's Path to near the summit. Martin's Path starts on the south western slopes of the Rock gently above the derelict Levant Battery near Jews' Gate Cemetery and proceeds to its first bend as the path turns to the east side of the Rock where it joins Mediterranean Steps. Martin's Path actually continues onwards to Martin's Cave but the way is prohibited and a locked gate protects the cave.[2] The route is entirely within the Upper Rock Nature Reserve.

The Goat's Hair Twin Caves can be seen on the way. These caves show evidence of when they were sea caves and the level of the sea was dramatically higher. These are amongst a number of caves in Gibraltar which have given evidence of prehistoric human habitation.

The path goes on to the abandoned Tunnel and Pumping Station where it continues on a short path to a viewing platform and continues up the Rock to the twin batteries on the Rock's upper ridge.[2] The path emerges at what was the location of O'Hara's Tower, known in its time as 'O'Hara's Folly',[3] a watchtower built in an attempt to observe shipping in the port of Cadiz, which proved to be useless, and which was damaged by lightning. The tower was later demolished, by the unusual method of a bombardment from a ship of the Royal Navy in the bay, allegedly after a bet with the garrison.