The Charles V Wall is a 16th-century defensive curtain wall that forms part of the fortifications of Gibraltar. It was built in 1540 and strengthened in 1552 by Charles V, Holy Roman Emperor and King of Spain. The wall remains largely intact and extends from South Bastion, which was once at the water's edge in the harbour, to the top ridge of the Rock of Gibraltar.

The lower section of the wall runs up from the South Bastion which was once at the water's edge in the harbour, to Prince Edward's Gate at the base of a steep cliff. It is pierced by the Gate of Africa, which is defended from above by the Flat Bastion.

The upper section of Charles V Wall, somewhat further south, runs from the top of a cliff up to the crest of The Rock. It zigzags up the slope of The Rock in four stages in a configuration that lets the defenders give flanking fire to each face.[1] The Hacho (later the Signal Station) at the top of the wall was once equipped with a small tower.[2]

Another wall continues from the lower section of Charles V Wall almost all the way up to the top of The Rock and known as the Moorish Wall. It was once thought to be an ancient wall from the Moorish]] period. However, the Muralla de San Reymondo ('St Raymond's Wall'), also known as the Philip II Wall, was built during the 16th century by King Philip II of Spain as a fallback defensive line.[3][4] 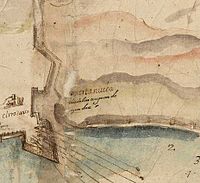 1608 plan of the lower portion of the wall, by Cristóbal de Rojas

At the time the Charles V Wall was built, the Barbary pirates posed the main threat to the city.[5] In September 1540 Gibraltar was attacked by a corsair force led by Piali Hamet, one of Barbarossa's captains. The town was plundered and many of the leading citizens were taken captive.[6] The captives in the 1540 raid on Gibraltar regained their freedom when a Spanish fleet led by Bernardino de Mendoza intercepted the corsairs on their return to Algiers and defeated them in the Battle of Alborán.[7] In 1540 therefore the wall was built to help defend Gibraltar against further attacks from the south.[1] It was originally called the Muralla de San Benito ('St Benedict's Wall'),

Starting around 1552 the Italian military engineer Giovanni Battista Calvi made improvements to the wall.[1] Calvi designed a wall that ran west-east in a straight line from the coast for about 918.6 feet (280.0 m) until it reached a precipice. A traverse ran north-south along the top of the cliff, and then a zigzag wall ran up to the crest of the Rock of Gibraltar.[8]

Philip II succeeded Charles V in 1558, and commissioned the Genovese engineer Giovan Giacomo Paleari Fratino to continue the improvements. El Fratino decided that the traverse should be abandoned, and what had been done on Calvi's zigzag wall should be demolished. Instead, an upper wall should continue the line of the lower wall from the top of the cliff to the crest of the rock. El Fratino's upper wall was completed by 1575, running parallel but to the north of Calvi's upper wall. Fratino's wall today is called the Philip II Wall.[8] Work was stopped on the traverse, but Philip II's chief engineer Tibúrcio Spanucchi refused to stop work on the zigzag wall, which was eventually finished in 1599, and forms the upper portion of the Charles V Wall. The traverse wall along the top of the cliff was never built.[8]

A 1565 sketch of the wall by Anton van den Wyngaerde shows that it did not then have bastions, but depicted a gatehouse projecting from the wall to the African Gate. The Baluarte de Nuestra Señora del Rosario (now South Bastion) and the Bastión de Santiago (now Flat Bastion) in the lower section of the wall had both been built by 1627.[1] Fratino built the South Bastion, which was possibly improved by Alsatian engineer Daniel Specklin, and built the Flat Bastion.[4]

In 1627 the Spaniard Luis Bravo de Acuña wrote a treatise on the fortifications of Gibraltar for King Philip IV of Spain.[9] He noted the use of strategically placed boulders that a single man could roll down on attackers, and of hoardings above the city gates holding large rocks that could also be dropped down on attackers.[10]

In July 1704 during the War of the Spanish Succession, combined forces from England and the Dutch Republic led by Sir George Rooke, captured Gibraltar. The Spanish attempted to recapture The Rock in October 1704, its Twelfth Siege. A force of five hundred volunteers led by Spanish Gibraltar-born goatherd Simón Susarte managed to scale Charles V's Wall, and massacred the guard at Middle Hill, but were attacked by a party of grenadiers and were all either killed or captured.

The Southport Gates were built in place of the old Puerta de África in the lower section of the wall.[10]

Deadman's Cemetery used to be located on the inner (north) side of the wall, above the Southport Gates with some of the headstones dating back to 1738. In 1798 Southport Ditch Cemetery (later renamed Trafalgar Cemetery in honour of the Battle of Trafalgar) was consecrated, a small graveyard on the other side of the wall from Deadman's Cemetery.[11] Many of the tombstones are those of victims of the 1804, 1813 and 1814 yellow fever epidemics. Trafalgar Cemetery fell into disuse after 1814. In 1929 Deadman's Cemetery became part of St. Jago's Barracks and was turned into a ball alley and rifle range, with the headstones relocated to Trafalgar Cemetery in 1932 and embedded into one of the walls.[11][12] The upper section of Charles V Wall was restored in the early twenty-first century by the Bonita Trust, together with the Government of Gibraltar.[13] The wall is in good condition and is fitted with a handrail and it is possible to walk along it from the foot to the top of The Rock.[4] The upper section of Charles V Wall lies within the Upper Rock Nature Reserve which was established in 1993 and covers about 40% of Gibraltar's total land area.[14]

Inglis Way, one of the walks within the reserve begins at Queen's Gate near the foot of the upper section of the wall at Prince Ferdinand's Battery. It leads through a region of esparto grass, white asparagus, common asphodel and germander.[15]