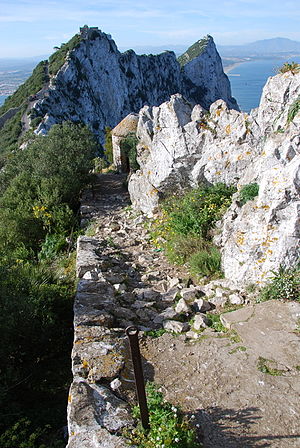 Douglas Path is a path that connects a series of military installations at the top of the Rock of Gibraltar. It leads from the top of Charles V Wall to Mount Misery, one of the peaks of the Rock, before proceeding southwards to end at Douglas Cave. The first section of the path climbs a steep set of steps before running along a knife-edge ridge.

The path provides spectacular views over both sides of the Rock of Gibraltar. The sheer east face of the Rock and the Great Gibraltar Sand Dune, which covers a large part of the eastern slope, can readily be seen. The vista provides sweeping views over the Bay of Gibraltar to the west and the Mediterranean Sea to the east.[1] The path was cut by convict labour to facilitate troop movements on the Upper Rock.[2]

Map of the Douglas Path

Shortly after setting off from the north end of the path, an old circular stone building is reached. Its construction has traditionally been attributed to the period of the Moorish occupation of Gibraltar (between 711–1462). In fact, it is much more likely to be an early British structure[3] which appears to have been built using stone recycled from an earlier building.[2] It is nonetheless one of the oldest surviving structures at the top of the Rock. A short distance past the old observation post is a World War II structure, the Fortress Commander's Command Post. The path then descends to meet O'Hara's Road, which leads to O'Hara's Battery.[1]