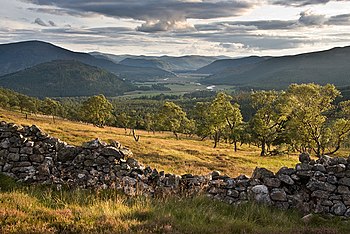 Marr or Mar (Gaelic: Màrr) is a traditional district of Aberdeenshire, consisting of the western half of the county; a great mountainous area. The name of the area is found in that of its greatest town, Braemar, which means "Hill of Marr".

Marr stretches from north of the Don southward to the Mounth. It reaches into the Grampian Mountains and the Cairngorms, where the county border at the westernmost end of the shire is defined by a great looping ridge amongst the heighest of its mointains. Here is the highest point of Aberdeenshire, and of Banffshire; the summit of Ben Macdhui, which is also the second-highest mountain in the British Isles.

The district borders Perthshire (Atholl), Inverness-shire (Badenoch and Gowrie), Kincardineshire, Banffshire and Buchan (the latter a part of Aberdeenshire).

A man from Marr is called a Màrnach in Gaelic.

To the west, the mountain environment of the Cairngorms sustains a well-developed tourist industry based on heritage and outdoor pursuits. Forestry and livestock farming are key industries, particularly in remoter areas. To the east, Marr has experienced population growth due to its strong commuter links with the city of Aberdeen.

Like other such ancient districts, Mar was once under the rule of a mormaer. In the 12th century the Mormaers of Mar were no more and an Earl (the Earl of Mar) took his place, but no definite succession of earls appears till the 13th century, nor is any connection established between them and the mormaers.

When the Highlands were shired perhaps as early as the eleventh century, Marr formed the larger portion of the shire of Aberdeen.