Lydart is a dispersed hamlet within the parish of Mitchel Troy, Monmouthshire. It is located about three miles south-west of Monmouth, three miles north of Trellech, and a mile south-east of Mitchel Troy village, on the top of an escarpment which slopes steeply down to the valley of the River Trothy and which commands spectacular views. The B4293 road passes through the area.[1]

Lydart House is described as a "handsomely proportioned"[2] eighteenth-century house, of six bays and two storeys. The nearby Lydart Farm is likely to have been originally constructed in the sixteenth century.[2] Both are Grade II listed buildings.[3] 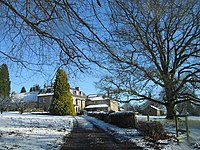 The Society of the Sacred Cross convent at Ty Mawr

Caer Llan, a mile to the south of Lydart House, is a former country house, thought to have been built about 1800 but much extended in various stages since that time. After being used briefly as a boarding school, it began to be used as a field studies centre in 1971. It is now also used as a conference centre and events venue, and provides some accommodation.[4] Ancient woodland to the south east of the centre is a Site of Special Scientific Interest (SSSI).[5]

Ty Mawr is a convent run by the Society of the Sacred Cross in a secluded location at Lydart. The community was established at Ty Mawr in 1923, and today consists of about ten professed sisters, with several oblates and associates.[6]

Other buildings and structures

The Gockett Inn was a public house located on the B4293 road. It is known to have operated since at least the 17th century and to have been used by drovers, but closed down around 2003 and is now a private house.

A boundary stone at Five Trees marks the point at which the boundaries of the ancient parishes of Cwmcarvan, Mitchel Troy, Penallt and Trellech meet. Four trees were planted to mark the junction before 1800, and a fifth was placed in the middle as the central point. The site was restored in 1982/83, with the assistance of young persons employed under the Youth Training Scheme.[7]

High Glanau, a house and garden built in 1922/23 for the architectural writer and garden designer Henry Avray Tipping, is located just south of Lydart, within the community of Cwmcarvan.[8]