Lurg Mhòr is a mountain amongst the Torridon Hills of Ross-shire, which reaches a height of 3,235 feet at its summit, and so it qualifies as a Munro.

This is most southern Munro in the Torridon region and one of the more inaccessible ones. Lurg Mhòr is normally climbed with neighbouring Munro, Bidein a Choire Sheasgaich, as the two are connected by a high ridge.

The summit has two tops on either end of a small plateau, the western top being the true Munro summit. From the summit two main ridges stretch forth; the west ridge by way of a high rocky ridge to a col and on to Bidein a Choire Sheasgaich and the eastern ridge much longer, running down the spine of Meall Mhor to the shores of Loch Monar. This latter ridge has a series of crags on the northern side and slightly easier slopes on the southern side.

The summit afford spellbinding views north to the rest of the Torridon Hills and south-east to the hills of Glen Affric and Strathfarrar.

A climb normally begins at Achnashellach to the north and will demand a long walk in. Bidein a Choire Sheasgaich is normally climbed first by way of its long northern ridge and on to Lurg Mhòr from there.

These hills are remote and a big expedition to reach and climb them is an attraction. 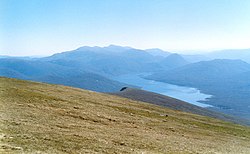