Carn nan Gobhar is a mountain on the border of Ross-shire with Inverness-shire, which reaches a height of 3,255 feet at its summit, and so it qualifies as a Munro.

It rises on the northern side of Loch Mullardoch in the upper part of Glen Cannich. It stands some 50 kilometres west-southwest of the city of Inverness in a remote group of four Munros informally known as "The Mullardochs" which form the high ground between Loch Mullardoch and Loch Monar.

Càrn nan Gobhar reaches a height of 3,258 feet and qualifies as a Munro and a "Marilyn". Somewhat confusingly there is another Càrn nan Gobhar, also a Munro with almost exactly the same height 9 miles to the northeast, on the northern side of Glen Strathfarrar. In both cases the name means "Cairn of the Goats".

Càrn nan Gobhar is the lowest of the four Munros on the north shore of Loch Mullardoch and is rather overshadowed by them. Topographically it is quite featureless, being mainly composed of rolling grassy slopes interspersed with patches of rock and scree, though with steeper slopes on the west and east flanks. 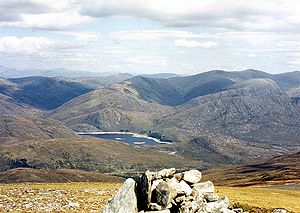 From the summit to Loch Monar and Glen Strathfarrar

Càrn nan Gobhar has three main ridges, giving the mountain a roughly triangular shape. The 3.5 km long south ridge passes over the subsidiary top of Mullach na Moille (2,497 feet) before swinging more easterly and dropping down to the eastern end of Loch Mullardoch. The north western ridge links to the adjoining Munro of Sgurr na Lapaich by way of the Bealach na Cloiche Duibhe.

Creag Dubh, NH199350, 3,107 feet is a subsidiary top, listed as a Munro Top in Munro's tables, found along the north-eastern ridge. Creag Dubh has a prominence of 305 feet and was designated as a mountain in its own right in Sir Hugh Munro’s original list of 1891, but was downgraded to a top in 1921.[1] Its north-eastern slopes are initially rocky as they drop down to the Glen Strathfarrar Forest.

Càrn nan Gobhar’s best feature is its south-facing corrie of Coire an t-Sith ('Corrie of the Fairies'). It is drained by the Allt Mullardoch which descends to Loch Mullardoch in a series of small waterfalls. The corrie's well-constructed stalker's path can be utilised to make a high level circuit of the corrie which takes in the Munro summit and the “Top”. All drainage from the mountain is east to the Beauly Firth by way of the glens of Strathfarrar or Cannich.

The most convenient starting point for the ascent of Càrn nan Gobhar is the parking place at the end of the public road in Glen Cannich by the Loch Mullardoch dam at grid reference NH219315. The route follows the northern shore of the loch for 1a mile before ascending steeply up the south ridge passing over Mullach na Moille on the way to the summit.

The mountain is often climbed in conjunction with Sgurr na Lapaich and strong walkers will also take in the other two Mullardoch Munros, An Riabhachan and An Socach.[2]

The summit of the mountain is a broad, flat north-south ridge with two cairned points 200 yards apart. The smaller northern cairn marks the summit and gives good views north to the Monar Forest Munros of Maoile Lunndaidh and Lurg Mhòr. It is also a good viewpoint for the corries and cliffs of nearby Sgurr na Lapaich.[3]