Loxley is a village at the edge of the cityscape of Sheffield, in the West Riding of Yorkshire. It is a long linear community which stretches by the side of the River Loxley and along the B6077 (Loxley Road) for almost two and a half miles. Loxley thus extends from its borders with the suburbs of Malin Bridge and Wisewood westward to the hamlet of Stacey Bank near Damflask Reservoir.

The centre of the village is at the junction of Rodney Hill and Loxley Road where the old village green stands, three miles north-west of Sheffield city centre. 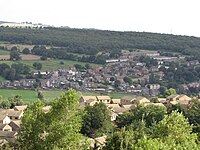 The centre of Loxley from Stannington

The name 'Loxley' derives from the Old English words lox leag, meaning "Lynx meadow". Loxley had a population of 1,775 in 2011 Census.

The area on which Loxley stands was originally moorland; Loxley Chase was a large expanse of upland ground set aside for hunting by the Norman lords after the Conquest in the 11th century. The Loxley valley was an extensive woodland which was mentioned in the inquisition post mortem after the death of Thomas de Furnival, 1st Lord Furnival (1270-1332). Hunting on Loxley Chase was an infrequent pursuit, and so much of the more productive ground in the valley was turned over to farming. Loxley developed over the following centuries as agricultural and common land with a few scattered farms.[1][2] 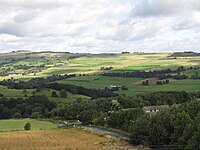 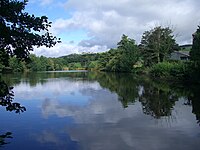 The extensive forest of Loxley Chase extended as far south east as Nottinghamshire in the 12th century where it joined up with Sherwood Forest. Loxley is one of the locations claimed as the birthplace of Robin Hood. It is maintained that Robin of Locksley or Robert Locksley was born in the area in 1160 with John Harrison saying in his Exact and Perfect Survey and View of the Mannor of Sheffield of 1637, "Little Haggas Croft (pasture) wherein is ye founacion of a house or cottage where Robin Hood was borne." Little Haggas Croft was in the area of present day Normandale House on Rodney Hill. Ballads from the High Middle Ages published in the Child Ballads such as A Gest of Robyn Hode, Robin Hood and the Monk, Robin Hood and Guy of Gisborne, and Robin Hood and the Potter, as well as Sir Walter Scott's 1820 novel Ivanhoe all point to a possible Yorkshire birth for the legend.[3]

Industry came to the Loxley area in the middle of the 17th century when the first mills were set up on the fast flowing River Loxley as small pocket businesses. Steel and iron forging and rolling mills were established and became the main manufacturing processes with the Loxley Steel Works, the Green Wheel Steel Works, the Little Matlock Rolling Mill and the Olive Rolling Mill all becoming established industries by the river. Many of the mill ponds associated with these mills are still present on the river and provide a haven for fish and wildlife.[4]

During the 1800s the Loxley Valley became an important producer of refractory bricks for the expanding Sheffield steel industry. The bricks were used to line the furnaces and were made from ganister, a sort of sandstone and from fireclay from the Stannington pot clay seam which was prevalent in the Loxley area. Many ganister and fireclay mines existed in the area supplying the local firms of Siddons Bros. (Ganister), Thomas Wragg & Sons (Old Wheel Brick Works) and Thomas Marshall and Co. (Storrs Bridge Brick Works) and later Hepworths, which sprang up in the district and produced the bricks. Refractory production ceased in the area in the 1990s. Wraggs and Marshalls along with Dysons at nearby Stannington, specialised in manufacturing fireclay based casting pit refractory hollowware for the steel industry worldwide. Carblox, part of the Marshall group, shared the Storrs Bridge Works site manufacturing carbon blocks for use in hearths in blast furnaces.

All three plants (Marshalls, Wraggs and Carblox) closed following a collapse in demand for casting pit refractories of the type made locally mainly because of the introduction of continuous casting of steel worldwide and because of the general demise of the British steel industry.

Farming in the Loxley Valley was extended by the passing of the Wadsley and Loxley Chase Parliamentary Act in 1789. This allowed the conversion of moorland to grass pasture which was enclosed by straight dry stone walls and roads.

Loxley suffered greatly on 11 March 1864 when the dam wall of the Dale Dike Reservoir was breached causing the Great Sheffield Flood. 17 people died in the flood in the Loxley area including five members of the Chapman family along with their domestic servant Alathea Hague and apprentice John Bower. The trip hammer and rolling mill works owned by the Chapmans was completely destroyed. Most of the industrial mills in the area were either destroyed or severely damaged but were quickly rebuilt with compensation money from the Water Company.[5]

The substantial residential development of Loxley started between 1905 and the beginning of the First World War with housing expansion taking place on Rodney Hill and Loxley Road near the village green. Inter-war building established the Normandale area and after the Second World War a large amount of council housing was built in the area.[6] 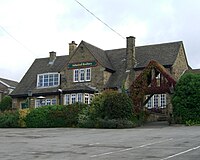 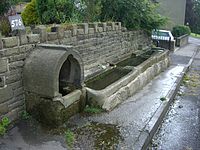 Loxley has no extensive shopping area with most of the residents commuting to Hillsborough to do their shopping. There are three public houses in the area, the best known of which is the Admiral Rodney; the pub has a long history and was originally named after George Brydges Rodney, 1st Baron Rodney after his defeat of the French in the Battle of the Saintes in 1782. The current Admiral Rodney dates from 1957 when the old pub was demolished and a new one built further back from the road.[7] The Nag's Head is in the small rural hamlet of Stacey Bank and is surrounded by farm buildings at the very west of the suburb. The Wisewood Inn is the most easterly of the three and is situated in the Normandale area.

After the closure and sale into private ownership of Loxley Methodist Church in 2012, there are no longer any churches in Loxley: the Church of England parish church for the village is in neighbouring Wadsley. The church building at the junction of Loxley Road and Low Matlock Lane was built in 1885. Loxley Chapel, near the junction on Loxley Road and Rowell Lane was built in 1787 and closed in 1993 and is now in private ownership although the burial ground is still used.

The site of the former Hepworth's refractory works was purchased by the house building company, Bovis Homes Group who intended to build 500 homes on the site in plans released in 2006. However the plans have met stiff opposition from the Loxley Valley Protection Society, the Loxley Valley Design Group, the Campaign to Protect Rural England and Bradfield Parish Council. Bovis have not received permission to go ahead with the development and as of 2009 the site is still a derelict industrial site.

Loxley has a recreation ground on Loxley Road near the junction with Long Lane; it is the only substantial public open space in the suburb. However, just to the north is Loxley Common, an ancient area of common land which is now owned and managed by the council on behalf of the people of the city. The common consists of heathland interspersed with trees. The southern slopes of the common which run down to the Loxley Valley have a sandstone escarpment, below which is thick woodland.[8]