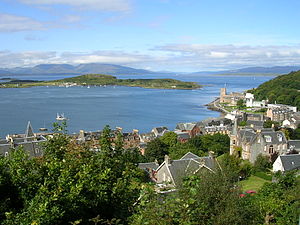 Oban and the Firth of Lorn

Lorne (Gaelic: Latharn) is a district of Argyllshire lying on the west coast, north of Knapdale. Lorne borders Knapdale and Argyle to the south, Lochaber to the north and Breadalbane to the east. The Firth of Lorn separates the Isle of Mull from islands off the Lorne coastline.[1]

Its single town and the effective capital, standing on the Firth of Lorn, is Oban, the "Gateway to the Isles" from which ferries sail for the Hebrides.

The Black Galley of Lorne is a much used emblem in heraldry and probably most famously appears as a quartering in the arms of the Duke of Argyll.

Lorne is believed to take its name from the chief Loarn mac Eirc, whose clan, the The Cenél Loairn controlled the ancient region named Lorna,[2] in these parts of northern Argyll around the Firth of Lorne, perhaps extending to the Isle of Mull, and even to Morvern and Ardnamurchan. The chief place of the kingdom appears to have been at Dun Ollaigh, near Oban. The chief religious site may have been on the island of Lismore, which in the High Middle Ages was the seat of the Bishop of Argyll.

Loarn mac Eirc was a brother of Fergus Mór Mac Earca who, around the year 500 AD became ruler of the Scottish Kingdom of Dál Riata. Loarn created his own dynasty in the new kingdom, in the district to which he gave his name.

Since 1470, the Lordship of Lorne has been held as a subsidiary title of the Earls and later the Dukes of Argyll. The current Duke's son is the Marquess of Lorne. "Lorne" is also a frequent Christian name amongst the Clan Campbell from this connection.