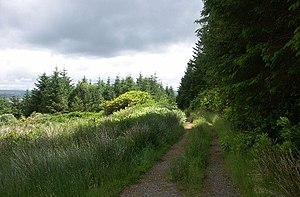 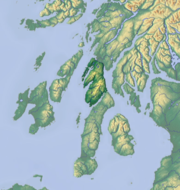 Knapdale is a district of Argyllshire, lying between Kintyre to the south and Lorn to the north and between the seas to its east and west. The Sound of Jura, part of the Sea of the Hebrides, is to the west and the Firth of Clyde to the east. Knapdale is divided from Lorn to the north by the Crinan Canal and from Kintyre by the narrowing of the land at Tarbert. It has two parishes, namely North Knapdale and South Knapdale.

Knapdale has a designation as a National Scenic Area.

Knapdale Forest was planted in the 1930s and covers much of the region. During the 1930s, the Ministry of Labour supplied the men from among the unemployed, many coming from the crisis-hit mining and heavy industry communities of the Central Lowlands. They were housed in one of a number of Instructional Centres created by the Ministry, most of them on Forestry Commission property; by 1938, the Ministry had 38 Instructional Centres across Britain. The camp was used to hold enemy prisoners during the Second World War. The hutted camp in Knapdale was located at Cairnbaan, just south of the Crinan Canal, and a surviving building remains in use as a Forestry Commission workshop.

Local attractions include the Chapel of Keills, A grave-slab in the chapel has a carving of a clarsach harp similar to the Queen Mary Harp currently at the Museum of Scotland in Edinburgh, one of only the three surviving mediaeval Gaelic harps. West Highland grave slabs from the Argyll area, suggesting that Knapdale is where this harp originated. The village also has a thirteenth century Kilmory Chapel and the eleventh century Castle Sween.

In late 2007 a successful application was made for a project to release beavers in Knapdale,[1] and the first beavers were released on the 29 May 2009.[2][3] This initial release into the wild of 11 animals received a setback during the first year with the disappearance of two animals and the unproven allegation of the illegal shooting of a third. However, the remaining population was increased in 2010 by further releases.[4]

Places in Knapdale include:

The Census in 2011 reported a population of 2,724, with 326 in North Knapdale and 2,398 in the South. Census figures for the 19th and 20th centuries show a continuing and steady decline of population in North Knapdale, from a peak of around 2,700 in 1825 to under 500 in 1950. The addition of Kilberry to South Knapdale make historic comparisons for South Knapdale less certain, but this part of the region appears not to have suffered the same depopulation as the north, and even modest growth, a rise from around 1,750 in 1801 to around 2,700 in 1901.