Lisvane is an ancient parish in the Kibbor hundred of Glamorgan that forms an affluent suburb in the north of Cardiff. It is located five miles north of the city centre. Lisvane has an average house price £410,000 as of 2011, with many properties worth in excess of £1 million.[2] Lisvane has 3,319 residents,[3] and comprises approximately 1,700 dwellings, a local village shop, a primary school, a community cabin library, a park, a nursery, a parish church, a public house, a war memorial, a Scout hall and village hall.

Most historians agree that Llys-faen was its administrative centre of Kibbor, however Roath has also staked a claim. In each commote the royal taxation house was a large building made almost certainly of stone because it had to be permanent, weather proof and thief proof. There is now no indication of the actual whereabouts of the Llys Faen or Stone Court, although various theories have been advanced.

The earthworks at Graig Llwyn is held to be the oldest artificial feature in Lisvane, proposed by several archaeologists to be the remains of an Iron Age stronghold. No definite date or purpose can yet be confirmed for this earthwork.

At the start of the 13th century the parish lands of Llanishen and Lisvane had been divided into Norman manors that were expected to provide food for the castle garrisoned at Cardiff. The southern facing slopes of the ridge above Lisvane with their rich agricultural land soon became the grain growing area for the supplies which were transported to Roath Mill for processing.

There is a local legend that Oliver Cromwell once stayed at the Black Griffin Inn,[4] prior to the Battle of St Fagans in May 1648 and that the Cromwell family once lived there briefly. There is no evidence to support this, though Cromwell must have lodged somewhere, but it is more likely that the Inn's only Cromwellian association is with soldiers of Cromwell's Model army. Cromwell was, however, of Welsh ancestry (his real name was Williams) and his great-grandfather came from this area.

The farmhouse, on the Graig slope overlooking the village, was included in the estate of the Lewis family. In 1900 part of the estate was let to Lisvane Golf Club, who established a 9-hole course there but two years later, the club moved to Radyr, taking the clubhouse with them. From just after the Second World War, the fox hounds of the local Lisvane Hunt were kennelled at Tŷ Mawr until it became a public house in the 1960s.

The Llanishen and Lisvane Hunt had several homes over the years with the hunts most latterly setting off from Llan Farm on Graig Llwyn Road. The village hunt disbanded around 1997 on the death of the then hunt Master.

There is a local tradition that for a period during the 1800s, Erw-wen, on Rudry Road, was also a pub or beer house, possibly called the Red Cow, although no documentary proof has been found.

Unlike the Norman parish church of St Denys that has stood for over seven hundred years, the first Baptist Chapel in Lisvane was built in 1789 on Chapel Road, now renamed Rudry Road, and only stood for less than thirty years until it had to be rebuilt during 1818. Less than forty years later the foundations of the second church were becoming unsafe and a third chapel was constructed, but by 1910 further renovations and repairs were necessary as it had become dilapidated. Just a hundred years later the Methodist congregation no longer supports a separate chapel building and now holds its weekly services in the Memorial Hall.

Lisvane and the Cold War

A few yards away from the Ordnance Survey's triangulation point on the Graig stands Lisvane's only Cold War nuclear bunker. During World War II the Royal Observer Corps (ROC) observation post stood on the Graig with its clear views over the village and the city of Cardiff. The volunteer ROC observers spotted many German Luftwaffe raids approaching across the channel and activated the air raid warnings in the Cardiff area. In early 1966 a protected nuclear fallout shelter (or bunker) was completed on the site for the ROC (OS Grid Ref: ST 1898 8508), who by the 1960s had switched from above ground aircraft spotting to underground operations with instruments to detect nuclear explosions and warn the public of approaching radioactive fallout in the event of nuclear war.

The only time post members had been mobilised and volunteers spent nearly ten days underground was during the Cuban Missile Crisis as the government prepared the country for potential outbreak of war. The Lisvane nuclear bunker was abandoned by the ROC in 1991 when the Corps itself was disbanded with the end of the Cold War and as a result of recommendations in the governments Options for Change review of UK defence. The Lisvane nuclear bunker still exists but it was purchased by a mobile phone communications company who built a radio mast inside the fenced compound and sited some of their equipment in the underground facility. 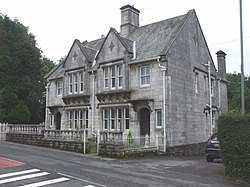 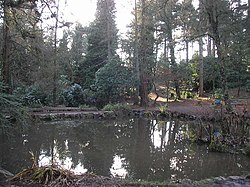 The surrounding soils are mostly a strong, brown, dry earth, well adapted for arable farming and the growing of grains of all kinds that contributed to the area being a mostly farming community until the modern era. Soils were further enriched over the millennia by alluvial deposits from the meandering River Taff and other smaller tributaries. The substratum under the whole area is a limestone and lime shale that was likely laid down under a warm ocean at some stage in the distant past and subsequently ground down by glaciers during the last Ice Age around 18,000 years ago.

The neighbouring suburbs are Llanishen to the south, Thornhill to the west and Lisvane's effective northern border is the M4 motorway. The M4 corridor around Cardiff was announced in 1971 as a replacement for a northern link road that had been on the statutes since 1947 but never built. The northern 'Lisvane route' for the M4 was eventually chosen after a number of public enquiries and objections from village residents. The new motorway was completed and opened in July 1980.

The Graig is a hill situated north of Lisvane. It borders on Caerphilly. There is also a quarry near the Graig which is now abandoned. The Rhymney Valley Ridgeway Walk runs along the top of the Graig, and has some very good walks and mountain biking routes. Particular favourites for locals include routes to the east to Rudry and the Maenllwyd Inn, and to the west to Caerphilly mountain, The Travellers Rest, and further on to Tongwynlais, Castell Coch and the Taff Trail.

The United Kingdom Census 2011 demographically showed that the total population of Lisvane was 3,707. The average age was 44.6 years old and 69% of the adult population were married.

1,515 were in full-time employment, and 188 of those worked exclusively from home. Of those that travelled to their place of employment 1,090 drove by private car, 74 travelled by train and 43 by bus, 34 walked, 9 cycled and 77 travelled as passengers in other vehicles.

There are little in the way of major employers in the village. The area still has a predominantly farming economy. Some local employment is provided by the service industries of the shops and public houses. The general affluence in the village is mainly drawn from employment in the central Cardiff. An increasing number of employees are working from home via high speed internet links and telephone.

Following improvements in the road and rail infrastructure some Lisvane residents commute daily to work in Bristol and London.

Corpus Christi High School is the only secondary school located within Lisvane, just on its boundary with the ward of Cyncoed. However, school age residents fall into the catchment area for Llanishen High School in Llanishen, which is more accessible. 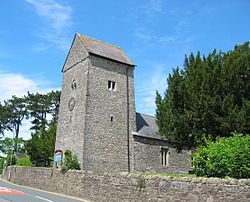 Lisvane has two active churches that meet for a range of weekly services in the village:

Originally built in the 12th[5] century and remodelled several times since, St Denys' Church[6] is an Anglican church which holds both traditional liturgical and modern services. The congregation meets in the Listed Church Building, which is notable for the imposing and unusual tower with a pitched roof but lacking the normal Norman castellations, located just opposite the Black Griffin pub in the centre of the village.

Howell Harris, one of the most famous pioneer Calvinistic Methodist ministers, preached regularly during meetings held at several private houses in Lisvane between 1766 and 1769, just before his death.

Lisvane Cricket club was formed in 1976. The club is now based at Llwynarthen in nearby St Mellons. They run 5 adult sides, with the 1st XI playing in the South East Wales Cricket League Division 2, as well as running youth sides from Under 9 to Under 19.

Lisvane Panthers Junior Football Club fields sides in the under 8 Mini league, the Juniors at 11 – under16 and an over 16 youth team.

Lisvane Panthers Football Club, home ground Cardiff University pitches in Llanrumney, entered the Lazarou League in 2011. The team won three league and cup doubles (Division 4 in 2012, Division 3 in 2013, Division 2 in 2014) as well as reaching consecutive Lazarou Cup finals in 2013 and 2014.

Lisvane (CAC) Tennis Club is located just north of Lisvane and Thornhill railway station and is the tennis section of the Cardiff Athletic Club. 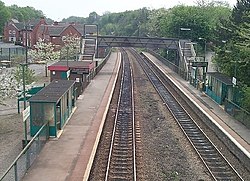 The area is served by Lisvane & Thornhill railway station with services northbound to Rhymney and southbound to Cardiff Central via Cardiff Queen Street.

There are two pubs in Lisvane; the Ty Mawr and the Black Griffin, named after the Tredegar House Morgan family's arms that featured a gryphon, sable, segreant, and only recently returned to its traditional name having been called simply The Griffin for many years. There is a third pub called The Old Cottage just across the railway line that divides Thornhill and Lisvane.

Near the centre of the village is Parc Cefn Onn or Cefn Onn Country Park an extensive mixed species arboretum, with lakes and woodland walks. The park was laid out around ninety years ago and planted by the railway manager who lived in a large estate near Cefn Onn Halt, at the time Lisvane's tiny "request only" and underused railway station, which closed in 1985 when it was replaced by the current modern railway station closer to the village. Cefn Onn Halt stood a hundred yards away from the railway tunnel that vanishes under Llanishen Golf Club and Caerphilly mountain.