Leitholm is a village in Berwickshire, four miles north-west of Coldstream. It was founded, along with Eccles by John Edgar.

Other places and sights nearby within the county include the Crosshall Cross, Duns, Eccles, Ednam, Fogo, Greenlaw, Hume Castle, Polwarth and Westruther.

Just to the west of the village (NT783438) is the ruin of Leitholm Peel, a mediæval tower-house, which is to be found about 300 yards east-north-east of Stainrigg House.[1]

This fortified house, with walls three feet thick, provided a place of refuge during times of conflict and local tradition holds that cattle were driven here for protection. Today, parts of three walls remain, with some of the north-west wall still standing up to 20 feet in height.

The tower was reputedly destroyed in September 1545, during Lord Hereford's ruthless two day raid through the Scottish March. Hereford's actions, part of the 'Rough Wooing', destroying many buildings including religious foundations, houses and castles. 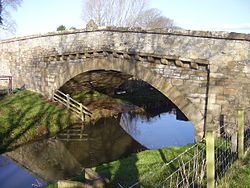