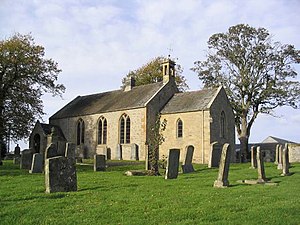 Ednam is a small village and parish near Kelso in Roxburghshire, close to the border with Berwickshire. Its name is a corruption of the Anglo-Saxon "Edenham", i.e. the town on Eden Water.

The parish is bordered by Berwickshire on the south-east and north-west, namely the parishes of Nenthorn and Eccles respectively; Stichill forms a salient of Roxburghshire to the north-west; while Kelso and Sprouston adjoin the southern boundary. Other nearby places include Gordon, Greenlaw as well as Floors Castle.

Ednam is notable for having been associated with several Scottish poets, namely Henry Francis Lyte, writer of Abide With Me; William Wright, John Gibson Smith and James Thomson, writer of Rule Britannia.

Other people associated with Ednam include William Purves, a banker. John 'Coocke' or 'Cuke'- grandfather of Captain Cook also came from here.

Near the village is a knoll called The Piper's Grave. It is named after a legend that a local piper once went searching for fairies in the hill, and was never seen again.[1]