Laverton is a village in Gloucestershire, sitting less than a mile south of the village of Buckland.

The cluster of cottages and farmhouses here are built of local Cotswold stone, the oldest dating back at least to the 17th century.

The nearby Honeybourne railway line currently terminates at Laverton Halt, and the Winchcombe Way, a long-distance path, crosses the village.[1]

The village has a stone-built village hall, providing a 70-seat community building for the parish.[2]

To the east of the village is Laverton Hill, formerly an area of limestone quarries. This is part of a Cotswold escarpment that runs from Broadway to Winchcombe, and is followed by the Cotswold Way National Trail.[3] 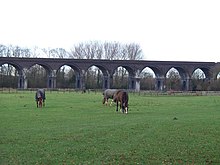 Between 1905 and 1960, the village was served by Laverton Halt on the Honeybourne line, part of the Great Western Railway network.

During 2011-12, Laverton Halt was brought back into use (as a run-round loop) by the Gloucestershire Warwickshire Railway, a heritage railway. Laverton currently serves as the GWSR's northern terminus, with trains running from the site of Laverton Halt to the station at Cheltenham Racecourse, a total of twelve miles away.

The GWSR will be extending its running line northwards to Broadway, Worcestershire.