Launceston Castle stands on a high motte in the midst of Launceston in Cornwall, overlooking the town. 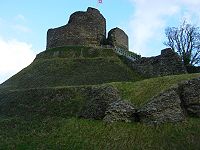 The motte at Launceston Castle

The castle is a Norman motte and bailey castle raised by Robert, Count of Mortain, half-brother of William the Conqueror shortly after the Norman conquest, possibly as early as 1067. Others attribute its foundation to Brian of Brittany though he only stayed in England for about five years after the Conquest.[1] It became the administrative headquarters for the powerful Earls of Cornwall where they could control the vast estates that they owned throughout the area. The castle remained with little development, apart from an inner keep added in the 12th century. During the 13th century, Richard, Earl of Cornwall, a younger brother of Henry III began to rebuild the castle in stone.

The tower was constructed from a darker stone than the rest of the castle, with two rooms. A new great hall was constructed within the confines of the 12th century bailey, which remained in use until the early 17th century as an Assize Hall. In the late 13th century, the administrative centre for Cornwall was moved from Launceston to Lostwithiel.

A chapel was built within the castle and endowed by the Earl of Cornwall.[2]

In 1548, before the Prayer Book Rebellion, 28 men of the county were rounded up and taken at gunpoint to Launceston Castle where many were hanged, drawn and quartered. This followed the killing of one of Thomas Cranmer's men, William Body, sent amongst other things to destroy superstitious religious shrines at Helston.[3]

The castle later fell into disrepair, despite still holding the local Assizes and the gaol. George Fox, the founder of the Quakers was confined at Launceston Castle for eight months in 1656.

During the Civil War, the castle's walls and defences were in such a poor state of repair that the Parliamentarian army did not bother to slight them when they gained control of the castle from the Royalists. In 1646 the castle was used as the base for the Cornish Royalist defence of Cornwall. Sir Richard Grenville, 1st Baronet, positioned Cornish troops along the River Tamar and issued instructions to keep "all foreign troops out of Cornwall". The Cornish were fighting for their Royalist privileges, notably the Duchy and Stannaries, and he put a plan to the Prince which would, if introduced, have created a semi-independent Cornwall.[4]

After the Civil War, only the north gatehouse was habitable. It was partially demolished in 1764 to provide stone for an impressive new house which was built immediately outside the north gate. In 1838 the assizes and the seat of county government were moved from Launceston to Bodmin. The jail, the last remaining building in the castle grounds, was demolished, and the Duke of Northumberland had the castle landscaped and turned into a public park and garden. It is now administered by English Heritage.

Prince Charles was officially proclaimed Duke of Cornwall at Launceston Castle in 1973. As part of his feudal dues there was a pair of white gloves, gilt spurs and greyhounds, a pound of pepper and cumin, a bow, one hundred silver shillings, wood for his fires, and a salmon spear.