Meikle Says Law is the highest hill of the Lammermuir Hills, rising to 1,755 feet. It stands on the county border of East Lothian and Berwickshire and provides the county top of each of them.

Meikle Says Law is found 5 miles southeast of Gifford, East Lothian. It stands high above the surrounding area, its steep slopes giving it local relief of a thousand feet or so.

As the hill's name suggests, Meikle Says Law is accompanied by Little Says Law, a hill with a summit a mile to the east. A little to the south is a lower hill confusingly named "Meikle Law". 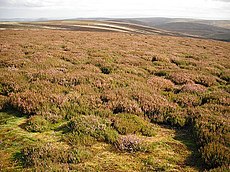 Meikle is of course from the Scots and Old Northumbrian English for "big", or "mickle" as is familiar in current Yorkshire dialect, and "law" the local name for a hill, common throughout the Middle Shires, from the Old English hlaw.

The slopes of the hill are bewrayed with rich moorland heather. It rises to a 1,755 feet at a small summit area marked with a trig point. The summit itself is in East Lothian and is that county's highest point. Berwickshire's boundary runs on the slope a little below the summit and reaches that county's highest point on a shoulder of the hill just nine feet short of the summit height, at 1,746 feet above sea level (NT581616).

The Faseny Water and the Dye Water, twin tributaries of the Whiteadder Water run from either side of Meikle Says Law 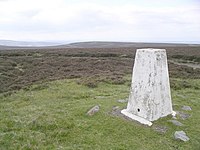 The original “Muir Road” which runs over Lammermuir from Burncastle shuns to run over the Meikle hill but passes close by the summit of the Little one.

The ascent of Meikle Says Law may be undertaken as part of a tour of Lammermuir, taking in several of the hills hereabouts, whether starting from the Berwickshire side of the East Lothian side. Gifford is the closest village, but various tracks lead across the moor, not least the Old Muir Road.