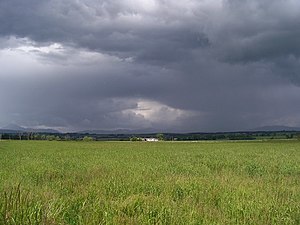 Fields in the Carse of Stirling

The Carse of Stirling, upstream of Stirling, is the rich agricultural land in the floodplains of the River Forth overspreading each side of the border of Stirlingshire and Perthshire.

This is an extensive area, broadly the upper part of the flood-plain of the Forth, above where the rive becomes tidal. It may be reckoned at 14 miles long and 4 miles broad, bounded by the Touch and Gargunnock Hills to the south and the Braes of Doune to the north.

Once the Carse was an impassable marsh: the lowest bridge on the Forth was at Stirling and everything above and below that bridge was a barrier between north and south to the extent that mediæval maps showed the lands north of Stirling as a separate island. The bog was inhabited only by wildfowl, midges and a few outlaws, and the blanket peat overspread it to a depth between 3 feet and 20 feet.

From the 1970s, local landowners began to drain the land for farming, principally Henry Home (Lord Kames) of Blair Drummond and Hugh Seton of Touch. The peat was stripped off. Families were encouraged from far afield to move onto the newly opened farmland, with the offer of land at much-reduced rents provided they clear the peat and expose the rich clay soil beneath. Tenants were provided with wood to build houses and food for a year.

By the 1860s the work has caused the River Forth to silt up downstream at Stirling, which effectively prevented access to the town by sea-going ships, and so in 1865 the scheme was ended. In the meantime though more than 10,000 acres of fertile agricultural land had been created, stretching 8 miles west from Stirling, and that land has been reckoned the best farmland in Britain.

Today, the Carse is still primarily agricutural land, for while the fields below the city have been dug out and filled with concrete as the Forth has been industrialised, the Carse remains as it was developed, as arable farmland.

Some of the original peatland does remain in the Carse, the largest area being at Flanders Moss, with isolated areas of at Blairdrummond Moss and Drip Moss.