Lake is a hamlet in western Devon, with barely more than a couple of cottages clustered around the Bearslake Inn, all along the A386 Okehampton to Tavistock road.

The hamlet it at the edge of the Dartmoor National Park, a mile south of Sourton and a mile east of Bridestowe. Rising from the east side of the hamlet is Lake Down, a finger of Corn Ridge, itself a subsidiary top of Great Links Tor (1,923 feet) away to the south-east.

It is not known how the village got its name: there is no lake here nor ever has been as far as can be told. A gruesome local legend is that in the Civil War the two nearby villages of Sourton and Bridestowe were of opposing loyalties between Crown and Parliament and fought a big battle here, leaving the area a lake of blood.[1]

The Bearslake Inn is a large in on the east side of the main road in Lake. The oldest part of the inn is where the bar stands and is thought to date from the 13th Century. It was a traditional Devon longhouse, which would have housed both man and livestock under a common roof. The longhouse was extended in the 16th and 17th centuries, adding chimneys, a parlour wing and first floor accommodation, and extended again in the 1980s.

The word 'Bear' in the name of the inn comes from an old Devon word meaning 'wooded place'.

The West Devon Way long distance path runs to the west of the hamlet and the Granite Way cycle path to the east, while a good bridleway joining them runs through Lake. 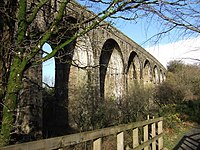 Lake Viaduct was built in 1874 to carry the Okehampton to Tavistock railway, which ran immediately to the east of lake, parallel to the main road. The line is now disused, but the viaduct remains, and is used to carry the Granite Way, a cycleway.