Sourton is a small village on north-western edge of Dartmoor in western Devon, and found about along the A386 road four miles south-west of Okehampton. The 2011 census recorded a parish population of 420.

Above the village to the east, the high moorland of Dartmoor rises steeply to the Sourton Tors (1,444 feet). The highest points of the moor, and of all Devon, High Willhays (2,037 feet) and Yes Tor (2,031 feet), stand under three miles due east of the village. Two long-distance walking routes, the West Devon Way and the Two Castles Trail, part ways by Sourton, the Two Castles Trail coming down to and through the village.

In the 1870s Sourton was described as: 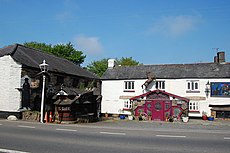 Sourton's main tourist attraction is its one pub, the Highwayman Inn which was built in 1812. In 1959 the Highwayman Inn was transformed from a normal , old West Devon country pub into riot of fanciful decoration; this includes having the old Launceston to Tavistock coach being used as the entrance to the inn.[2] The main draw the Highwayman Inn uses to attract tourists is a claim that it is the most haunted in Britain.[3]