Kinsham is a village in the Wigmore Hundred of Herefordshire, adjacent to the border with Radnorshire. It comprises Upper Kinsham, an ancient parish in its own right, and Lower Kingsham, a township of Presteigne. The village lies in the wooded hills of Herefordshire, near the town of Presteigne. Surrounding villages include Stapleton and Lingen. Kinsham lies on the River Lugg. The 2001 census records that 71 people lived in the parish of Kinsham, of whom 32 were male and 39 female.

There is evidence of human occupation as far back as the Bronze Age at a round barrow.[1]

On either 2nd or 3 February 1461 the Battle of Mortimer's Cross was fought downstream from Kinsham. In the aftermath of the battle Lancastrian soldiers retreated up the river Lugg and were trapped where the river gorge narrows at Kinsham. Local folklore states the river ran red with the blood of the soldiers when they were killed.[2]

The National Gazetteer of Great Britain and Ireland[3]

The mansion of Kinsham Court is near the village. Lord Byron lived here 1812–13 and here wrote the first two cantos of Childe Harold. Florence Nightingale spent part of her childhood at the house. Edwardian owner, Sir John Stanhope Arkwright (of the famous textiles family), wrote the hymn O Valiant Hearts.[4]
The mansion lies in a landscape park.[5] Picture of Lower Court, Kinsham by John Piper 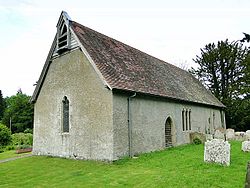 The village church is next to Kinsham Court and is still regularly used. It is of 14th-century origin with evidence of 18th-century woodwork. It is an Anglican church dedicated to All Saints[6] and is a Grade-II* listed building.[7]

The parish is now part of the benefice of Presteigne with Discoed, Kinsham, Lingen & Knill, with the Priest resident in Presteigne.

The Herefordshire Trail long-distance footpath crosses the River Lugg in the village and then climbs Cole's Hill.[8] There is a Kart-racing track just west of the village.[9]