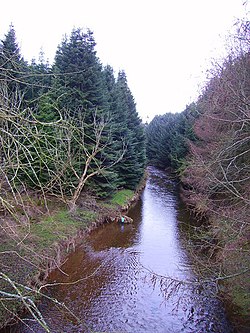 The Luther Water above the old Luther Bridge

The Luther Water is a river in Kincardineshire, which ultimately becomes a tributary of the River North Esk, which it meets at the county's western border.

The river rises in Drumtochty Forest in Kincardineshire (south of the Drumelzie Forest), in burns running off Goyle Hill (1,526 feet). From here the young river passes Drumtochty Castle and flows eastward into the Glen of Drumtochty.

Leaving the woodland, the river turns south, past Auchenblae and into the Howe o' the Mearns; the broad, fertile valley which fills much of the county.

In the Howe, the river wanders south-westwards amongst the farms, often diverted by ditches, north and west of Laurencekirk, broadening past Mill of Barnes and running almost parallel with the A90. By Luthermuir the river dips south, passes under the A90 and is swallowed in the River North Esk, which here marks the border with Angus.

Dam on the Luther Water

Draining chiefly agricultural lands, this stream has a notable lack of turbidity and alkaline waters at about 8.25 pH measured near the Mains of Luther.[1] Turbidity has been measured at 0.7 m by the Secchi disc protocol. Summer temperatures are approximately 16°C and electrical conductivity is 210 μS m-1.

Armouring of the stream bottom consists of small rounded stones varying typically from about ½" to 1½" in diameter, some of which are quartzite in composition, leading to a golden-green effect in some locations.