Kilrenny is a village and parish in Fife, and part of the East Neuk. It lies close to the south coast of the county, immediately to the north-east of Anstruther, separated from the town, on the A917 to Crail where a minor burn flows town to the rocky shore.

The name may derive from the Gaelic Cill Reithneach, meaning "church of the bracken". Alternatively, the '-renny' element may perpetuate a worn down form of Etharnán or Itharnán, an early churchman who 'died among the Picts' in 669 according to the Annals of Ulster. That Kilrenny is of early Christian origin is suggested both by the Kil- element of the place-name, and by a carved stone with marigold motif (circa 700?) which stands to the west of the village, possibly marking an ancient area of sanctity. 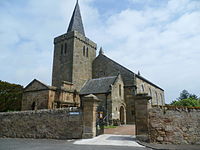 The village was formerly Upper Kilrenny, until nearby Lower Kilrenny changed its name to Cellardyke in the 16th century. The oldest part of the present church is the 15th-century tower, with the body of the building rebuilt in 1807-08 (re-using the original stones as building rubble). The attractive village has many well-preserved houses in the local vernacular style, with crow-stepped gables, datestones, forestairs, pan-tiled roofs and the like.

The parish, which includes the eastern part of Anstruther, has a population of 2,745.