Ketton is a village and parish in Rutland. It is about eight miles east of Oakham and three miles west of Stamford, Lincolnshire. The 2011 Census recorded a parish population of 1,926,[1] making it the fourth largest settlement in Rutland, after Oakham, Uppingham and Cottesmore.

Ketton was originally Chetene meaning "on the banks of the River Chater". It was originally three separate settlements: Ketton, Aldgate and Geeston; but as they grew they merged to form the village that Ketton is today.

The earliest parts of the Church of England parish church of St Mary the Virgin are 12th century. The church has a central tower and spire. The west front is an example of late 12th-century transitional architecture and the remainder of the church is mainly 13th century. The nave was restored under the direction of George Gilbert Scott in 1861–62 and the chancel under the direction of his pupil Thomas Graham Jackson in 1863–66. Jackson's chancel roof was painted by Ninian Comper in 1950. The stone is from Barnack. There are Ketton headstones in the churchyard; one by the lychgate depicts mason's tools and is by stonemason William Hibbins of Ketton. William Hibbins built Hibbins House, which is still standing today.

Robert of Ketton was the first person to translate the Qur'an into Latin. The translation was complete by 1143. 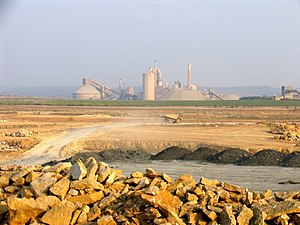 The village gives its name to Ketton stone a limestone which is quarried locally and is used in many buildings in the village and elsewhere. Some areas of former quarrying are now a Site of Special Scientific Interest, maintained by Leicestershire and Rutland Wildlife Trust.

The limestone is used to make cement. Ketton Cement Works opened in 1928 and by November that year the number of staff had risen to 250. The plant, owned by Hanson Cement (now part of HeidelbergCement), meets more than 10% of the UK demand for cement.

In 2013 Rutland Council approved plans for Lark Energy to build a solar farm on land reclaimed from a 1940s quarry. The solar farm provides 13% of the cement work's annual energy consumption. The second phase was opened by Secretary of State for Energy Amber Rudd.[2]

In 2004 Rutland Council planning committee resolved to approve a planning application for one wind turbine on land adjacent to the cement works off Steadfold Lane in Ketton. However, issues surrounding fast jets flying from RAF Cottesmore meant that a planning permission was never granted.

In 2011 REG Windpower announced plans to install two wind turbines near Steadfold Lane. The proposal was withdrawn in August 2012.[3]

Ketton is served by buses on the service between Stamford and Uppingham.[4] Ketton and Collyweston railway station closed in 1966 but has been proposed for reopening.[5]